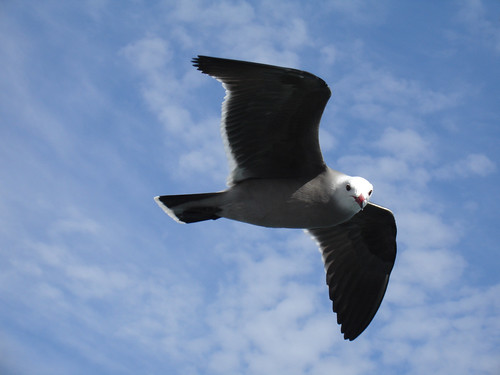 Yesterday I went out on Spirt Cruises Sunday morning whale watch trip. Leaving from Ports o Call at 11:30 AM we had a respectable group of folks on board. With the prediction for rain I was surprised to see so many folks taking the gamble (and winning).

Conditions on the water were good. It was a little overcast but sometimes that makes visibility easier by reducing glare. The water was pretty calm, a little chop from the wind but the swells were only about two feet with a rather long dwell.

Out on the water things were quiet. There were birds here and there, but no great gatherings that would indicate large pods of dolphins or rafts of sea lions. So we headed up towards Pt. Vicente from Angel’s Gate.

With over 30 whales sighted from Pt. Vicente the previous day as well as the Fin whales out in the Channel it felt odd to not even see more than the ocassional sea lion. But Captain Tim was a great spotter and soon he had us tailing a set of fluke prints (these are the disturbance left on the surface by a whale’s tail pushing up near the surface).

It was a snorkeling whale. The little whale would come up and barely break the surface to take a breath, make two or three strokes of its tale and then come up again. This was a baby gray whale.

It couldn’t have been more than 10 feet long (mother whales are about 45 feet) and didn’t even have an whale lice or barnacles yet. It might have been less than a week old and here it was swimming to Baja.

We were a little worried as we watched the whale for almost eight minutes, following alongside (the captain moved the boat a bit so that we were on the outside of the little whale and he was on the inside so we didn’t scare him deeper into the channel). But there was no momma whale?

Our concern continued that this calf was all alone. But after the boat was repositioned we saw two blows at the same time … momma was there, just below the surface the whole time, probably buoying up her little one.

After the boat settled in to a drift right alongside the whales we got a pretty good look at both of them and their behavior. The momma whale would only breathe about once for every five breaths the baby would take. Sometimes it seemed like the little one was riding on the mother’s back, being pushed up ahead of her to the surface, it’s little chin coming out of the water first.

(I would show you my photos of mamma and calf but they really suck … it could be a log floating in the water for all you know.)

We followed along with the pair for about a half an hour but then we had to pick up our pace a bit to make it back to port for the next sight-seeing trip at 2PM. The captain made one last little dodge in towards the shore when he spotted some Risso’s Dolphins. There was a group of about 12 that appeared to be feeding (they’d be at the surface for two minutes, then disappear for a few minutes and then come right up at the same spot). 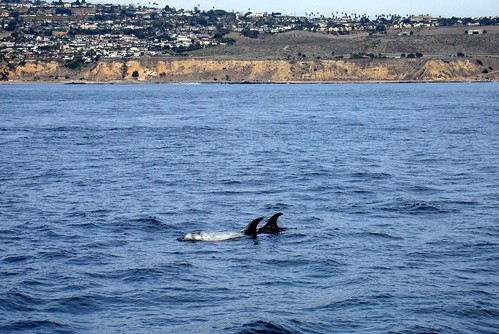 I enjoy the Spirt Cruises boat quite a bit, it’s a fast and stable boat with lots of room. The captain is an excellent spotter and has an incredible volume of knowledge not only about the wildlife but also about the history and current events going on in the harbor.

If you’re interested in going whale watching this season I’m putting together a trip for blogging.la readers for Monday, February 19th (President’s Day) – it will depart from Redondo Sportfishing. I’ve negotiated a special group rate of $8.00 per person … stay tuned for more info on how to sign up!