Market Squid are running in the channel off Pt. Fermin now. Market Squid (Loligo opalescens) are about a foot long and seasonally come in and rise to the surface to breed. For the past five years this annual opportunity for harvesting the squid has happened around the other side of Catalina (the squid are probably sensitive to currents and water temperature and perhaps wherever their prey is). But this year they’ve emerged off Pt. Fermin/San Pedro. 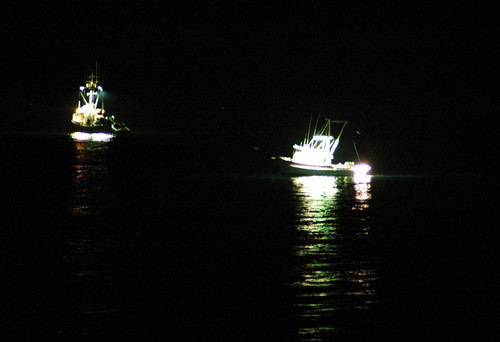 Photo from flickr user Life on the Edge of MarshallAstor.com

It’s a sight to behold, as the fishing is done at night. The fishermen put out huge bright lights (some green, some white, there is debate over which works best) to attract the breeding squid and then scoop them up in big purse seine nets. You can see the brightly lit boats bobbing in the ocean in little lines and clusters as they vie for their portion of the catch. The local squid catch has been unusually low this year and fishermen have been importing bait from further north (and the prices were pretty high). These squid may have been what the Risso’s Dolphins off Pt. Vicente have been eating as well (they’re found deeper during daylight hours).

If you’re looking for something to do this week, you might want to take a cruise down to watch the ghostly boats fishing. (Also, Comet McNaught is very bright just after sunset, so you can get lots of observing done just after sunset.)