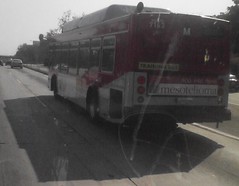 DigLounge speculates the alleged Google glitch that misled Ruth666 may have also been partly to blame for the death of CNet writer James Kim.

Adam at LAist uncovers what may be a bit of deception on the part of Bristol-Meyer’s and their “Light A Candle” campaign. The drug company promised to donate $1 to AIDs charities for every click, and the information was spread via email worldwide… but the fine print limits their donations at 100,000…

Caroline on Crack gives us the lowdown on car sharing service Flexcar.com.