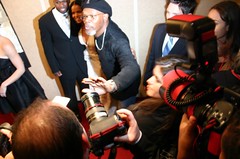 The first of two Bullet entries for today… pic at right (by me) from Tuesday night’s benefit premiere of “Home of the Brave” for New Directions, Inc.  You can’t see it, but Sam Jackson’s right hand is reaching for his lightsaber (the one the says “bad [email protected]” on it).

Win tickets to see Crispin Glover’s “What Is It?” by telling us about your own Crispin sighting – leave a comment by tomorrow morning with Heathervescent here.

Clueless and Slightly Slack advocates returning the term “dame” to the common vernacular.

Mack at LA Voice herds in the reindeer Santa Clauses.

Spike Lee’s next film will be about the L.A. riots: “”This isn’t about some cavalcade of stars, but rather a truthful and realistic examination of what happened, what the ramifications were and where we are now, in hopes that something like this doesn’t happen again,” Lee said. (from Daily Variety)

Independent Sources grumbles that his mayor in Pasadena Pacific Palisades is Captain Stubing.