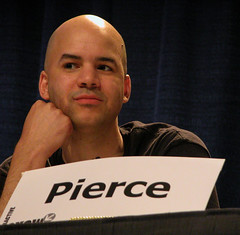 Anti-blog militia has LAist editor in its crosshairs

An organized gang of Wikipedia users are waging a self proclaimed “War On Blogs” to have certain blogger’s articles deleted from the online encyclopedia. Currently under attack are the Freeway Blogger and Tony Pierce, editor of LAist and writer for his own site, the Busblog.

Wikipedia user “Timecop/The war on blogs” has a page that outlines the plan for “Blogs Under Termination from Us Queers (B.U.T.F.U.Q.)” that explains:

So, there are hundreds of utterly worthless blog-related pages on Wikipedia. My goal is to get rid of a lot of them.

In order to have a Wikipedia entry deleted from the site it needs to be “nominated for deletion” then voted on by other Wikipedia users. User Femmina listed Pierce for deletion for the following reason:

Vanity and self-promotion. Apparently this guy did nothing in his life except writing in blogs.

As of this writing, the votes look unfavorably on Pierce, with ten votes for deleting the entry and five to keep – one of the keeps being Tony Pierce himself.

Most of those voting to delete Pierce’s question his “notability”, the main criteria for inclusion on Wikipedia. However, Wikipedia’s definitions of “notability” include the following:

The person has been the primary subject of multiple non-trivial published works whose source is independent of the person.

The person made a widely recognized contribution that is part of the enduring historical record in their specific field.

Pierce defends himself by listing his accomplishments, including appearances on G4TV, mentions in the New York Times and Washington Post, having a word he coined (“blook”) a nominee for Oxford’s word of the year, and is the number three result when you Google the name “Tony”. This doesn’t mention the hundreds of additional bloggers who credit Pierce with inspiring them to write, or influencing their style. Rank wise, of the millions of blogs online, Technorati has listed his Busblog in the top 500, and Blogebrity ranked Pierce an “A List” blogger when it launched almost two years ago.

It would seem that within the field of blogging, Tony Pierce is doubtlessly notable – so is the notability of the field of blogs a legitimate issue, or coud this be a coordinated attack on blogs by Wikipedia users who don’t like the medium and some of its players?

On a related note, Timecop also lists a fellow Metblogger, San Francisco’s Violet Blue, as being next in its queue for attempted deletion.

30 thoughts on “Is Tony Pierce notable?”