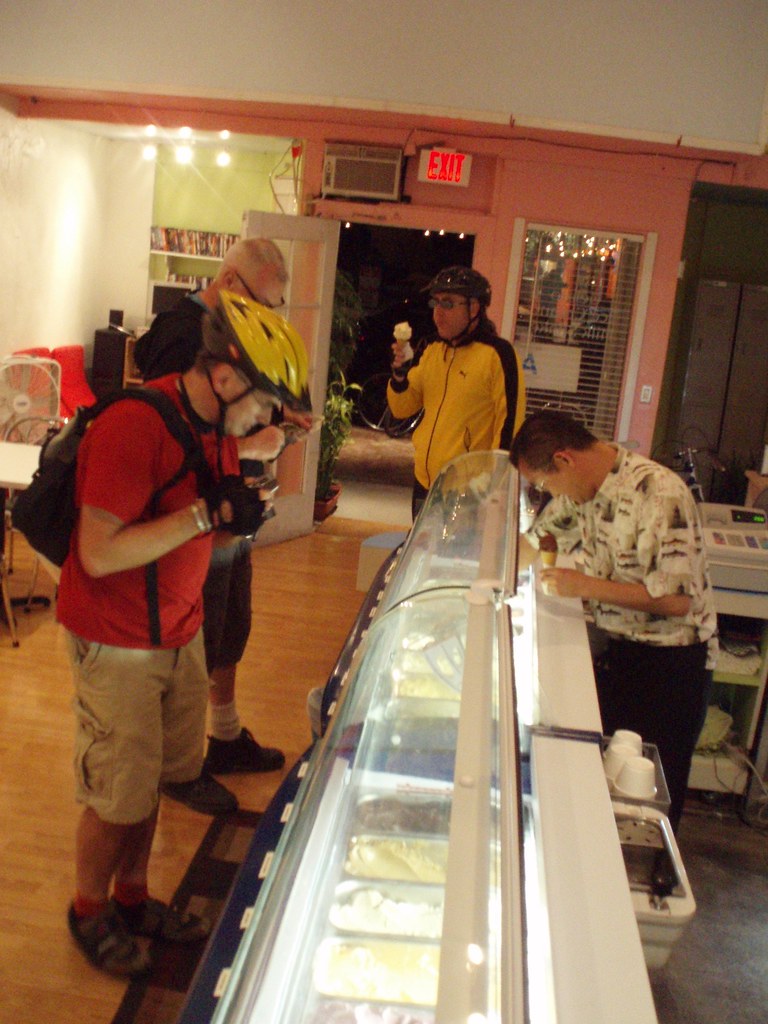 So with a quartet of riders on hand for last night’s IAAL‚Ä¢MAF ride, we rolled around Hollywood before ending up at Amoeba records and after that for some late night dining at Zankou. But first up we took an early break with a stop at the two-mile mark for some Scoops ice cream sweetness, and a cool what-are-the-odds thing that happened while we were there that I wanted to share.

With Michael Baffico across the street at Orange 20 bike shop checking to see if they had a long-stem presta tube in stock and Stephen Roullier making a stop to say hey at the Bicycle Kitchen a couple doors down, L.A. Voice’s Mack Reed and I were out in front of the ice cream parlor discussing the place’s diversity of flavor combos — some of them quite odd — and just as another customer exited between us I made reference to one of the fictional mad-scientist flavor pairings I’d included in my B.la post titled “The Emperor Of Ice Cream” following my first visit a couple weeks ago.

A beat after I spoke the made-up combo the customer stopped on the sidewalk and turned to face me.

“Gunpowder and mentos… you wrote that?” A little startled at the confrontation I hesitantly replied that I had.

“Get the fuck out!” Actually what I said was either “Cool!” or “Awesome!” but I was totally thinking “Get the fuck out!” and I stuck out my hand and introduced myself and he said his name was Jeff and that he’d been meaning to come to Scoops for awhile but that my post is what got him to stop putting it off. A beat later he thanked me and I thanked him and he was gone and I turned to Mack with a Ferris Bueller facing-the-camera look on my mug and he just has this big one-writer-to-another grin on his.

I can’t remember what we said after that, but I’m pretty sure we were both thinking “Get the fuck out!”

Not a lot of pix from this tour, but I did get some when we stopped at the unique old residence purported to have been the temporary Hollywood digs for a far more famous scribe when he came to Hollywood way back a hundred years ago this year.

2 thoughts on “Serendipity At the Ice Cream Shop”