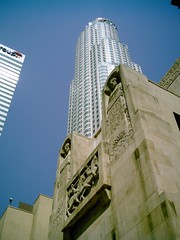 I’ve learned some things about this event I’m in Saturday that will involve me and a bunch other people climbing more than a fifth of a mile straight up 1,500 stairs from the bottom to the top of the U.S. Bank Tower’s 75 stories.

I learned that “most climbers,” which just so happens to be the category I fall into, will get themselves to the roof in anywhere from 20-45 minutes. I also learned that elite climbers will crest in 13 minutes or less and the event’s record is 9:28. Holy handrail that’s like an average of less than eight seconds per story — an average!

Having never done anything like this before (and at this point wondering why I decided to now ), I have no idea what my time across the finish line might be but I’m going to be sure to take it easy and hope for somewhere around 30 minutes of lactic acid-churning lung-wrenching hell — all the while reminding myself that the reward isn’t just the help I’m providing the Ketchum YMCA downtown, but also the spectacular city views I’m hoping for from the unique opportunity to stand atop the tallest building between Chicago and New Zealand and take a good long look around.

Online registration for the ordeal is now closed but if anyone out there gets the sudden sillies and starts thinking “Hey! I don’t really want to but I can do that!” late registrations will be taken the day of the event.