For me, one of the more interesting aspects of urban cycling is the alternate universe “boxxa chocolates” random shit you come across on two wheels that remains otherwise unknown to those traversing town on four wheels. Truly you never know what you’re gonna roll over. Tuesday on Hoover north of Jefferson near USC it was the flattened foot and talons of what looked to be a nice-sized raptor of some sort, and today on my way to some errands it was this old gas cap that had been embedded in the asphalt of Fairfax Avenue for what looks to have been a long time:

“MAJOR CONSTRUCTION BEGINS AT THE INTERSECTION OF HIGHLAND & FRANKLIN” so says my local Neighborhood Council.

After months of intermiitent underground work with the occasional lane closure, “major construction” commenced this morning.

Councilman Tom LaBonge advises, “taking alternative streets during the length of the project, which is expected to continue through early 2007.”

If any readers who travel through the area discover tried and true alternates, please let us know and we’ll post them here.

Snapped during a bike-by on Melrose just west of Cahuenga. Just go to the website.

Jon from Center for Creative Voices in Media just send me an email about a public hearing in Los Angeles held by the FCC. Since it’s Friday and I’m exhausted, here’s the email:

Next Tuesday, October 3, the FCC will hold a public hearing in Los Angeles as part of its ongoing proceeding to potentially relax or eliminate limits on media ownership. Members of the public are invited to attend and make two minute statements via “open microphone” to the Commissioners.

I encourage those in the Los Angeles area to take advantage of this unique opportunity to speak directly
to all five FCC commissioners on media issues that concern you, such as ownership concentration, lack
of independently-produced programming, “indecency” regulation, and others.

The hearing will be divided into two sessions. The first session will consider issues related to the creative community and independent programming, and take place at the University of Southern California from 1:00pm-4:30pm. After a two hour break, the hearing will reconvene at 6:30 p.m. at El Segundo High School, where a second session will discuss the Los Angeles local media market. Seating is on a first- come, first-served basis.

More details are in the extended entry…
END_OF_DOCUMENT_TOKEN_TO_BE_REPLACED

It’s a bit late in the week to be dropping this on folks but late is better than never, right? TONIGHT, in Atwater Village is the first Atwater Movie Night in the Red Car River Park. You can roll into Atwater Village, throw down a blanket and sit back as Atwater Movie Night presents the original version of E.T. The Extra-Terrestial. The Event is free and should be a good time for the old folks, the youngs folks, and probably everyone else who can’t decide where they fit in. The organizers are providing the popcorn, the rest is up to you. Thing begin around 7 with music, a raffle and some sort of surprise guest introducing the film. E.T. starts at 8.

Details, maps and all that fun at the Atwater Movie Night Myspace page. 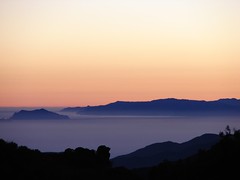 I’m not one to start a post with WTF … but Rep. Duncan Hunter (R-El Cajon) wants to turn Santa Rosa Island (part of the Channel Islands) into a hunting preserve … for veterans according to the LATimes.

Hunter’s proposal to open Santa Rosa Island to hunting by disabled veterans would mark the first time public access to a national park has been curtailed for the benefit of a single group of users. It would almost certainly face a court challenge.

Efforts have been ongoing to restore the Channel Islands and preserve the indigenous species … none of which would offer much fun for hunting (as the larger game including birds are almost all endangered or otherwise protected). Even worse, the proposal has been inserted into a pretty much unrelated military authorization bill.

Anyone else thing the name Duncan Hunter is kind funny in this context? 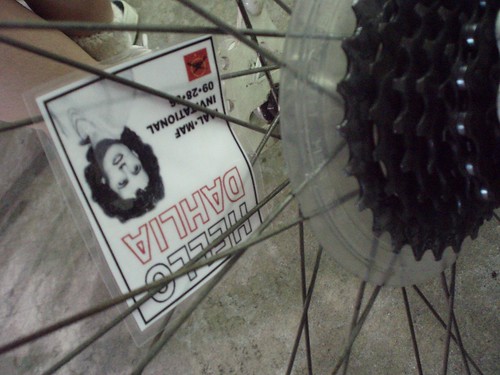 First off a moment of healing silence is in order for IAAL*MAF founder and food-poisoning strickened (and recovering) Sean who apparently ran out of breakfast cereal Wednesday evening and instead opted to enjoy his wife’s cooking on the very night she unwittingly whipped up some steamed Staphylococcus. Who’d a thunk that on the biggest night of IAAL‚Ä¢MAF’s little life we’d be forced to drive bikes while our fearless leader drove the porcelain bus?

But we are nothing if not a resilient bunch and with our awesome and highly coveted spokecards (pictured) firmly installed the 18-mile Hello Dahlia ride began and went off without a hitch and a damn fine turnout consisting of somewhere in the neighborhood of a score of cyclers. We first cruised up through skid row past the Biltmore Hotel, the lobby of which being the last place Elizabeth Short was seen alive on Jan. 9, 1947. Then it was an increasingly somber and subdued roll down Grand and down Fig and across Exposition and deep into Leimert Park to the corner of the well-kept front lawn of the residence in the well-kept block north of 39th Street where Short’s massively mutilated remains were found six days after her disappearance.

Breaking briefly we then pedaled up to the historic West Adams District to Arlington and 25th Street and the house made famous by the now-dead HBO series “Six Feet Under,” and after that it was back across town and up through Pico-Union to pay our respects to a different type of ghost, that of Kent Twitchell’s first public mural in L.A., a riveting portrait of Steve McQueen (better image of it here) that was painted in 1971 at 12th and Union and shamedly painted over sometime in the last few years.

From there it was back to downtown and Little Tokyo’s Joy Mart for the apres-ride ritual of drinks and sushi before heading to our respective homes where I threw the evening’s pix up here on Flickr before calling it a night. My thanks to everyone who came on out for the ride and my best wishes to Sean for a full and complete recovery.

Your hosts Fog Juice Electrical Souvenir Jamboree invite you “to return you to embracing warmth of the earth and the comforting hearth of the Country” as they present an evening of Dancing Lights, Lithely Writhing Beauties (reow), and Illuminated Fog…continue reading

From the I-wish-I’d-known-about-this-in-advance department, comes the news that today Saturday September 30th is Museum Day.

Sponsored by the Smithsonian Institution, museums all over the country are opening their doors for free today. All you have to do is print out a pass from the website, and you and a guest are all set.

A list of Los Angeles area participants is here, and includes the California Science Center, the Museum of Neon Art, and the Skirball Cultural Center.

Just when it seems all’s going well — or at least better — along comes the news that the Los Angeles basin has climbed back to the top as the nation’s smog capital, beating out rivals Houston and the San Joaquin Valley for that distinction:

“As of Sept. 27, the southland exceeded the federal ozone health standard on 86 days, compared with 83 days during 2005 and 88 days in 2004, according to the South Coast Air Quality Management District.”

Houston rang up only a measly 34 days, while the San Joaquin Valley missed it by that much with 82. Even with the strictest air-quality requirments L.A. is proof you can’t keep bad airborne particulate matter down.

Over at LA Voice, Mack contributes a lengthy entry about taking up Officer Deon Joseph on his offer to witness first-hand what it’s like to patrol Skid Row:

Joseph tells of good street people he’s lost over the years: A crackhead who called police to stop two robbers who she saw dragging a guy into a tent. They could have killed him if she had not reported it.

A few months later she was found with a belt around her neck, her throat slit from ear to ear. Not retaliation, he said they learned later. Just random violence.

Lots of powerful stuff. As one commenter says, “This should be required reading for every Angeleno.” Our own esteemed Will is in the loop to do a ride-along as well.

Just a heads-up that ArtNight Pasadena is coming up on Friday, October 13. There are fourteen insitutions participating in this free event…continue reading

Should you be so inclined, this Saturday is the long-anticipated Silver Lake Neighborhood Council Election.

Local politics – where you can actually make a difference.*