On Sunday I went over to San Pedro to check out the “Sunken City”, prompted by a little write up Meri found in the LA City Beat. 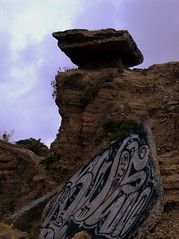 Cool stuff. Lots of old broken sidewalks and streets, hanging dangerously off of a cliff overlooking the ocean, with a great view of the Port of Los Angeles in the distance.

In 1929 a sizeable section of land in the southern tip of San Pedro began to unexplainably slip into the sea. The 600 block of Paseo Del Mar began moving seaward in 1929 and continued to slip until the mid 1930s. Movement was measured as high as 11 inches a day. Due to quick action, all but two of the houses on the seaward side of the street were moved before toppling into the sea.[via]

According to some, more of this place slips away every time it rains, so I am surprised it lasted this long, and maybe soon it will be gone forever.

Add this – along with the Dominator – to the list of “cool decaying things along the Socal coast”.

I took some pix, naturally. More to come…

9 thoughts on “Where The Sunken City Ends”