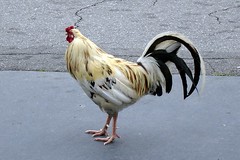 The LA Times ran a story yesterday about the LA dream moving east into the Inland Empire.

The region, often seen as a manufacturing and transportation hub, with less-expensive homes for those willing to commute to Los Angeles and Orange counties, is rapidly moving beyond its blue-collar roots into a more urbane future.

Increasingly, Western Riverside and San Bernardino counties are featuring the type of upscale houses, stores and entertainment long found in Los Angeles and other coastal enclaves. White-collar professionals such as Entner are finding attractive jobs there, no longer commuting westward. Tall office buildings are sprouting, along with more $1-million-plus homes.

I’ve had several family members move from East LA to the IE, but I still make fun of the place… especially when I see a rooster wandering around a Union 76 gas station off of Euclid Avenue in Ontario.

7 thoughts on “The Inland Empire”