Eric Richardson just made a post called
No Tow Trucks Downtown? where he’s documenting an accident that happened on 7th street and how long it’s taking various city services to show up and clear the thing out: 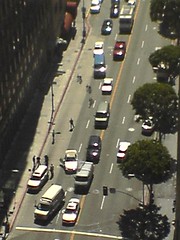 …You’ve got a disabled vehicle blocking a full direction on 7th Street, and it’s been there for over a half hour at this point. Still there’s no tow-truck, and 7th Street looks good and backed up.

After three or four minutes an ambulance stopped. He checked to make sure everyone was ok, and seems to have listened to the stories about what happened. After maybe 25 minutes the BID’s purple people showed up and set up the fun bike traffic block. And only now, a good half hour after the thing occured (and after I took the picture), did LAPD arrive.