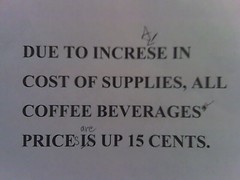 I’ve written more than a few times about how much I used to like Silverlake Coffee over on Glendale Blvd. Last summer Caryn blogged about how it was going down hill and I haven’t been back since. Yesterday morning I decided to give it another shot – boy was that ever a mistake.

When I walked in the first thing I noticed was how nice the place looked. I mean, it looked really nice. New tables, new lights, someone was not paying attention to all the details. Not that they weren’t before, but someone had clearly gone out of their way to spiffy the place up. As I got up to the counter I heard the last half of a conversation between the two people employees. The guy was explaining to the girl how he’d blocked a customer from their wireless network.

The guy took my order, same thing I always get at that time in the morning – large vanilla soy latte with an extra shot. He repeated back to me “Tripple vanilla soy latte?” “Yep, thanks!” I replied. He kept telling his story and walked over to the espresso machine. The lady then stepped in and “I’ll ring you up – that’ll be $5.85.” I thought, damn, prices sure have gone up here, guess that’s how they paid for the new tables. I paid her $6 and threw another buck into the tip jar. Since the guy was still making my coffee I sat down and opened my laptop. He was still telling his story at this point.

He said something like “yeah, I can’t believe she complained that she service was bad. She said I was rude, can you believe that? She’s always in here and it’s annoying but that won’t be a problem anymore. See each computer has it’s own number, there’s no way to tell which is which, but I just wrote down all the numbers and then when she closed her laptop last time I looked to see which one disappeared. So then I just banned that number so she can’t get on the network anymore. I can’t believe she complained about the service…” They went on back and for for a bit talking about this lady until he finished up with my coffee. “Here you go, tripple vanilla latte” he said. Hmmm.. “That’s soy right?” I asked. This is where things got ugly.

I packed up my laptop and walked out. I was 6 blocks away before I realized I didn’t even ask for my money back. It was too early in the morning and I’m pretty sure the 6-7 other people in line watched the whole thing unfold as well.

I can’t believe that lady complained about the service either.

12 thoughts on “In case you were wondering, silverlake coffee still sucks”