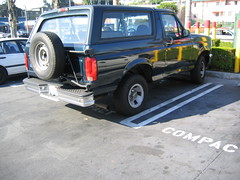 Compact spaces came up in a post last week, and personally I never understood why there are so damn many of them in parking lots across Los Angeles. I understand that it would seem to be that there are so damn many of them because developers would like to fit more spots, or encourage us to drive smaller cars. How conscientious. But a comment by Wil on that same post gave me a clue to what might be the real reason:

The city mandates a certain number of parking spots for every new development, like a mall for instance.

To get around spending precious land on parking lots, developers came up with the “compact” idea, so they can make the city happy, with fewer kickbacks.

It’s a pretty stupid fucking way to handle the problem of parking and it has nothing to do with encouraging people to drive smaller cars, or rewarding them when they do. Like a deadbeat dad who works for cash under the table, it’s just a way of getting around a system that simply does not work.

That sound about right to me. At first, I respected the fact that someone had carefully stencilled the word Compact on a bunch of parking spots, and since I don’t drive a compact(nor does most of LA’s populace), I didn’t park there. But then I realized how ridiculous this is, and now I completely disregard that word spraypainted on the ground. I think pretty much everyone else does as well. If you fit, you fit. My car is just as wide as most compacts.

Others might have the opposite idea. LAist proposes a special ticket to punish those who would violate the compact code. Personally, if I do have to park in a tight space, I park very carefully, in order to create less of an impact on the people who would park next to me. I would not want to incur the wrath of other drivers.

I know that blatant disregard for Compact spaces might be seen as an abomination by some, but in my mind it is pretty low on the totem pole in terms of parking problems in our city. Some people do park like idiots, and I do think that they should be pointed out and pointed at.

I just think that the whole compact space experiment has failed. Photo from vidalia.