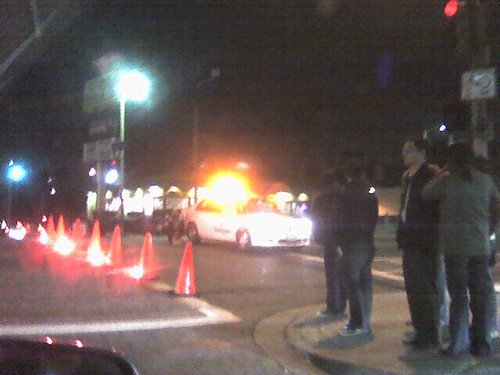 I don’t know if this is at all connected to Koga’s post below but when I passed Sunset & Silverlake about an hour ago there was definitely something going on. What I don’t know because all I could see was that sunset was blocked off starting at Parkman and headed south for several blocks. There were cones and flares and cops like you can see in this photo but what you can’t see are several more police cruisers parked sideways blocking the road headed down for several blocks. Anyone know the scoop?

UPDATE: As noted in the comments, the LAPD News Dept has the report:

” On Tuesday evening, a man was shot several times in the Silver Lake Area.

On January 31, 2006 at about 5:58 p.m., LAPD Officers were dispatched to an Ambulance Shooting call in the 2800 Block of West Sunset Boulevard. Officers found the victim, a 27-year-old, male Hispanic with several gunshot wounds.

The victim died at the scene. The victim’s identity is being withheld until his family has been notified.

This is an ongoing investigation and the motive for this shooting appears to be gang related.

16 thoughts on “Hoopala on Sunset”