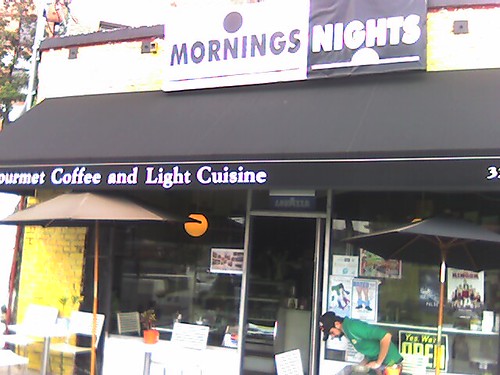 I’ve been meaning to blog about Mornings Nights (1523 Griffith Park Blvd –map ) since I found them a few months back. It’s a new-ish coffee shop in Silver Lake that I’ve been stopping by a lot recently. The first time I went there it was fantastic, the second time I went the guy at the counter asked me how many shots were in the large latte I ordered (which isn’t a good sign) and the result was so-so, I went back again and it was again really great. Since then it’s been more on than off and the last 4-5 times I’ve been it’s been perfect so I chalk the early stuff up to launching pains. I’ve been trying to convert other people and this morning took Mack Reed there as well. I think he dug it. They have no website, but plenty of free wi-fi.