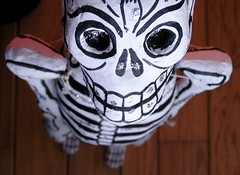 It’s not too early to make plans for DÌa de los Muertos (Day of the Dead). Xispas has a short list of some events in and around LA.

If you don’t want to paint your face like a calaca (skeleton), then maybe you can make your own Day of the Dead altar to honor loved ones who have passed away. It doesn’t need to be as elaborate as the ones you’ll find at Hollywood Forever cemetery. Simple votive candles, marigolds, pan de muerto (bread of the dead), sugar skulls, and photos are enough.

More info on Day of the Dead:

DÌa De Los Muertos is one of Mexico’s traditional holidays reuniting and honoring beloved ancestors, family and friends. It is an ancient and enduring ritual when the living commune with the dead ñ a mystical night when the veil is lifted between their two realms and they may share a day together.

The historical roots of this celebration date back to the pre-Hispanic cultures of Meso-America of the indigenous people, especially the Nahua (Aztecs, Mayans, Toltecas, Tlaxcaltec, Chichimec, Tecpanec) and others native to Mexico more than 3,000 years. When the Spaniards conquered the country, this indigenous custom was rooted so deeply that, after five centuries of colonization, it has continued to survive and remain as celebrated as in its first days.

Throughout each period in Mexican culture, death seems to hold no terror. In Mexican art, legends, and religion, death has not been a mysterious and fearful presence but a realistic recognizable character as much a part of life as life itself. Dia De Los Muertos expresses this perspective: it is not a mournful commemoration but a happy and colorful celebration where Death takes a lively, friendly expression and is not frightening or strange. There is no place for sorrow or weeping for this could be interpreted as a discourteous to the dead relatives who are visiting gladly.

Indigenous people believed that souls did not die, that they continued living in Mictl·n (Place of Death) a special place for them to finally rest. On Dia De Los Muertos, tradition holds that the dead return to earth to visit their living relatives. It is believed that although these relatives canít see them, they can surely feel them.

One thought on “Getting ready for the dead”