In today’s Wired News, a report I filed about Kaiju Big Battel — a multimedia event in which costumed combatants spew toxic ooze on audience members. The phenom is growing in popularity. There are already websites, message boards, monster profiles at online social networking services, and a DVD series. Coming next: a book and TV pilot… and a live show in LA on September 08. 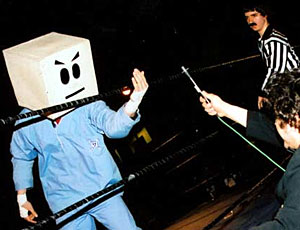 A Kaiju commissioner presides over these battles to ensure fairness. The clandestine Kaiju Regulatory Commission also functions as a sort of secret United Nations of monster fighting, regulating league activity and protecting humans from harm. As the group’s slogan warns, “Danger can happen.” “It’s their job to ensure that these events continue as a safe form of monster therapy,” says [Kaiju Studios’ Bill] Woods. “Monsters who have legitimate grudges need to work things out without destroying Cleveland in the process.”

(…)Show videos are streamed on the group’s website, where one also finds a monster manifesto. “Planet Earth is under threat,” the website warns visitors. “Scattered throughout the galaxy is a monstrous mob of maniacal villains, menacing alien beasts and giant, city-crushing monsters waging war against one another.” Global monster terror threats aside, organizers are optimistic about at least one thing: the size of their growing fan base. Nearly 2,000 are expected at the L.A. event.

“Now is a great time to be a monster — people really need a little distraction,” said David Borden, who co-founded the performance troupe with his brother Randy. Given America’s current fixation on the approaching 2004 elections, could Big Battel’s creators imagine one of their domination-craving members seeking office? “I could definitely imagine a monster running for president,” says Borden. “In fact, I think there may be two of them running for president right now.”