Yesterday I caught a subtle, phantom whiff of that smell I love so much. NO clue where it came from, but it was there, sweet and unmistakable, at 11am in the breezy morning air.

So much for winter, eh?

More crappy pictures of the springy verdancy around my little suburban digs after the jump.
END_OF_DOCUMENT_TOKEN_TO_BE_REPLACED

CSUN as seen with a tilt-shift treatment as taken by Dogwelder (Luke Gattuso).

Here’s a map of the location in the photo.

(Apologies for crappy cell phone pic)
Filling an essential role in nature’s byzantine web, Fatticus Escapus‘s grazing pattern and migratory behavior, often as far as the next yard over, provides a safe and stable hunting ground for Loud And Annoying Early Morning Mockingbird and creates clearings in otherwise rampant, wild and untamed Bermuda grass. Here, on these vast, open plains of finely nibbled verdancy, the intrepid squirrel, in search of a hiding spot for his ill-gotten gains from That Dude On The Other Side Of The Block Who Gives Whole Walnuts To The Fucking Squirrels, shall find no quarter–because, as we have seen (sadly, no photographic evidence exists), the raccoons of Canoga Park patrol this block, and confiscate all buried nuts for their own nefarious plots.

When approached, this particular representative of Fatticus Escapus managed a brave and effortful slump to the left, and may even have made a “flop” sound as he awkwardly moved his bulk away from me by approximately eight inches.

On Monday, just before 10am, terrorists detonated a small nuclear bomb in the northern Los Angeles community of Valencia.

I’m not wishing for a real attack on the city of Los Angeles by any means, but from a creative angle, choosing to blow up this somewhat removed suburb as a plot point on a top rated TV show was a bit of a cop out. Conveniently, the bomb was set off early, likely intended for a more populated and centrally located part of Los Angeles, but why did the producers deliberately choose not to nuke, say, downtown Los Angeles? Are the residents of Valencia less valuable?

Maybe the writers want to leave room for something bigger to happen later on, or maybe they felt if they blew up Hollywood they’d have a hard time topping this with a larger threat later on. But I can’t help feeling cheated out of the even larger controversy this could have caused, less of the fears about an actual nuclear attack, but more on a “what would you do?” level, providing a broader local context for people to discuss disaster readiness issues.

Anyway, if you’re interested in seeing what the physical effects of differing kinds of nuclear bombs might be in Los Angeles or other areas, you can check out the Hi-Yield Detonation Effects Simulator. Since this Google mashup is limited to showing structural damage, you might also want to check out the Federation of American Scientists’ Fallout Calculator, that has less options, but is equally creepy.

Then again, if you’re perfectly satisfied with watching Valencia getting pretend blown up, you can watch an outtake from the show after the jump:
END_OF_DOCUMENT_TOKEN_TO_BE_REPLACED

If you are a registered Democrat, and live in the 41st Assembly district (the Valley south to Santa Monica), then you can get out and bring some new voices to the party at the grassroots level on Saturday! Two friends of mine – Stacy Green and Jonathan Troen – are running as part of the Progressive Caucus, as delegates to the California Democratic Party. They wanted to bring some new voices to the Party, and bring about action on issues that the “old guard” aren’t moving on. These include: 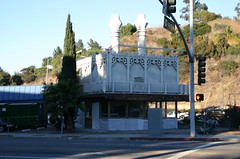 I suppose this is a question for the good folks at Curbed L.A. or the L.A. City Nerd (and I welcome both to answer if they’re reading this), but can anyone tell me about this building on the 3200 block of West Cahuenga Blvd.?

Built to look like a riverboat, a closer inspection indicates that this may have been a restaurant at one time. I’ve passed it a number of times over the years, always meaning to check it out. When I recently stopped by for a closer look, it appears that some of the outside walls have been recently removed, possibly an indication of a start for further renovation. I can’t recall if there used to be sidewheel facades on either side of the building, but those are definitely riverboat style smokestacks on top (contrary to some observations that the building isn’t trying to be a steamboat, but instead some style of Middle Eastern architecture).

My guess is that at some point this was a New Orleans themed restaurant, but my Google searches have yielded no answers.