Since we are tired of the thirty mile gap between us, the boyfriend and I have decided to narrow it down to a few feet, and move in together. And because he lives and works in Pasadena, and I live in Venice and work in Beverly Hills, we compromised and decided to move to Silverlake.

Today was the first day of househunting – and it was not terribly encouraging. A late lunch at Mae Ploy was the high point of the afternoon. And over a hot pot of tom yum gai, we discussed the translations of the ads I had so carefully pasted into Google Notebook:
END_OF_DOCUMENT_TOKEN_TO_BE_REPLACED

My wife Susan and I are HGTV junkies so of course she had it tuned in last night while I was out riding bikes (and generally commisserating with Eric of Blogdowntown who gave up trying to keep his front tire inflated after the fourth flat in something like 16 miles and hitched a welcome ride home fellow rider and B.la’er 5000!’s car).

Well it just so happened that during the intro to the channel’s “What is My House Worth?” show Susan spied none other than Franklin Avenue’s Mike and Maria (pictured at right just after a cameo by their “Blogger Toddler” and prognosticationalist extraordinaire Evan) getting their adorable Glendale house evaluated by various real estate and repair professionals. Thankfully my wonderful wife pounced on the record button and put the TiVo to work saving it for me to watch at my convenience… which was just a few minutes ago.

Anyway, I now know more about Mike and Maria’s house and its drainage/foundation issues than they’d probably want me to, but they and their 800-square-foot abode look great — even moreso after they got the news of its substantial worth. Congrats!

Today’s front-page article in the Los Angeles Times about one family’s struggle to find affordable housing after being forced to vacate their long-time Echo Park residence does much to illustrate the need for affordable housing, but also contains a common thread that I often see in articles about rising rents in previously low-rent areas:

She and Sanchez talked for a while about what was happening to them. The whites were moving in, they agreed, pushing out the Latinos, the immigrants. “It seems a little bit like discrimination, doesn’t it?” Sanchez wondered.

It is discrimination. But on the basis of cash, not on the basis of race. I feel that too often race enters into the equation when talking about housing. Yes, it is a side effect that more whites are moving into areas that were predominantly Latino, but is that the real issue? I am still trying to decide if turning an economic discussion(property owners want to increase profit, renters want to decrease spending) into a racial issue(whites want to move in, Latinos have to move out) is actually counterproductive to finding a real solution. Does it prevent an open dialogue about what is actually happening(lack of affordable housing)?

I am still trying to develop my thoughts on the issue(if there even is one), and I invite your comments.

The Downtown News released a breaking news announcement earlier today revealing that a well-known developer is going forward on a new skyscraper. Since there’s nothing for me to link to yet, here’s their announcement in it’s entirety:

Developer Rob Maguire is moving forward on a plan to build a 50-story office tower overlooking the Harbor Freeway, Los Angeles Downtown News has learned. According to local real estate sources, Maguire, who developed some of the tallest Downtown skyscrapers during the height of the 1980s commercial real estate boom, is about to formally announce a new structure directly west of the 777 Tower in the Financial District. Plans for the development site always included three office towers, a proposal that was long-delayed because of the downturn in the commercial real estate market. The project would complement the 777 Tower and what is now Ernst and Young Plaza and the 7+Fig mall. This would be the first new Downtown office high rise since Two California Plaza opened in 1992. Pasadena-based architecture firm Keating/Khang has reportedly been hired to handle the design. Maguire Properties owns six Downtown trophy buildings. Along with 777 Tower, its portfolio includes the Gas Company Tower, KPMG Tower, U.S. Bank Tower, Wells Fargo Tower and One California Plaza. Maguire Properties, a publicly traded real estate investment trust, has been the subject of buyout speculation within the past year. Maguire’s office did not return phone calls.

The News‘ latest edition with, I assume, more complete coverage is supposed to be uploaded by 7:00PM tonight.

Looking for an apartment or are your renting a studio in your basement? Want to know the going rate? Rentometer!

Just pop some specs in and they’ll tell you how much places are going in that area with real world examples if you click on the pins on the map.

Last November I posted in disgust then-and-now pix of Union Station showing the as-yet-completed residential complex being built on the southeast corner of Alameda and Cesar Chavez basically blotting out the view of one of my favorite architectural and historical structures.

Dubbed Axis At Union Station, its 272 units went up for sale this year in the sphincter puckering $600,000 range, and according to today’s L.A. Times article by Annette Haddad only a few unclenched enough to buy in. Only 41 sold until June when sales were suspended and buyers were told they’d receive their deposits back.

The article attributes the stagnant sales to the combination of a softening real estate market and an alleged downtown-wide glut of condos, but from my ignorant layman’s and decidedly biased perspective I think the fact that the place just sucks had something to do with it as well.

But it’s here to stay, only now for longer-term transient living. Now the landmark obstructor is back to its builder’s original intent as an apartment complex (whose floorplans measure between 664 to 1,460 sqaure feet, with the best going at $3,000 per month). They’ve even changed its name from Axis to Mozaic. Yes, with a “z.” 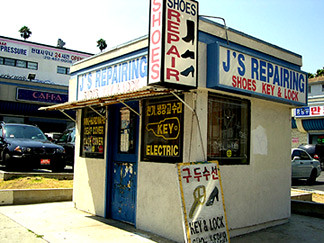 Add this one to the already interminable list of Los Angeles photogroups: LA Locksmith Shacks. Here you can post all of your many photos of locksmith shacks in the Los Angeles area.

Locksmiths are required by law to operate out of craptastic shacks in the corners of parking lots unless eligible for exemption as defined by Form 33LK.

When Caryn and I moved to LA 5 years ago we almost bought a house. A 3 BR hillside place in Mt Washington for $350K. We decided against it at the last moment and thought it would be best to get a feel for the city first then buy something. We try not to talk about that decision. Ever. For obvious reasons. The last few years we’ve seen the houses in our Silver Lake neighborhood go from $500K to $750K to $1.3M. We’d see houses go up for sale, and within days the signs would be gone and people would be moving in. Last week we were driving around and noticed that not only were the signs not disappearing as fast, but there were tons more of them. Houses aren’t selling as quick, and there are more of them to choose from. AOLer Jason Calacanis is seeing the same thing:

“Two years ago when I started looking it was the buyers were in a panic. You were told to make an offer within a day of seeing a house, and to send a letter to the owner about how privileged you would be if they would sell you their home. Of course you should offer 10% more than the asking price–you don’t want to be rude!

When we looked last week three of the eight houses were “flips” by real estate brokers. That is, houses they bought, remodeled and were no reselling. Those three “flips” were on the market for 30-120 days and had all been recently reduced 10-15% from their original asking price. Within 10 minutes of walking in each of the brokers said they had room to work, and that they could make changes to the home (i.e. we could put a room here or a pool–whatever you want).

The most telling part for me was that the brokers themselves are looking to get out. They want out so bad that they are willing to reduce the price by 10-15% not once, but twice, over ~60 days.”

Could prices be headed back in a reasonable direction? That sure would be nice for those of us still writing monthly rent checks.