Yesterday coming back from dutifully dropping off the Christmas tree at the recycling station set up yesterday in the L.A. Zoo’s parking lot, I finally had a chance to take in the new mural installed last week on the south side of Sunset Boulevard between Waterloo and Coronado in part by my favorite street artist, Caché,  that I first heard about via The Eastsider LA blog (who in turn got word of it via Echo Park Patch).

The wall has long hosted Caché’s chickens, going back as far as 2003. It wasn’t more than two months ago that the city cleared the overhanging foliage that blanketed the top half of the wall. Shortly thereafter some blighters with a compressor spewed their junk along the blank top half and as has often been the case, Caché (and his fellow artists Eyer and another whose name eludes me) teamed up to clean up that mess with what you see there today. Bravo!

Courtesy Caché’s Flickr photostream below is what the wall looked like as I first remember it in 2004, then is an image of the wall from 2006, followed lastly by how it looked up until the foliage clearance: 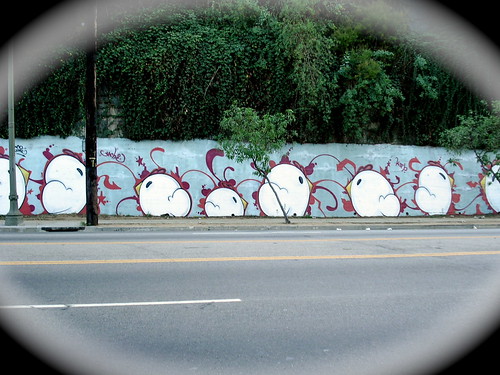 One thought on “It Caché’d My Eye: Fresh Paint”