I interrupt the blogging at Canter’s to pop in a quick post to mention why I had to leave at 6:30pm instead of hanging out with the crew. I walked up the block on Fairfax to the auditorium of Fairfax High School to attend the premiere of the Gay Men’s Chorus of Los Angeles (GMCLA) of Harvey Milk Schools Project which was co-presented by the Equality California Institute (EQCAI). 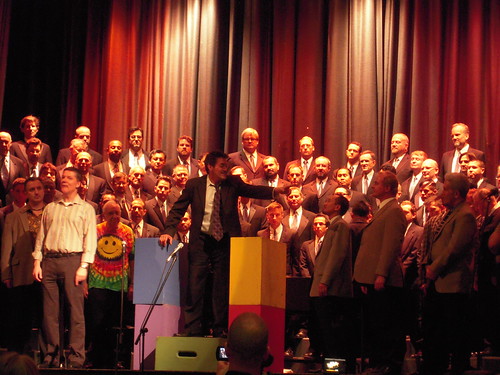 I was honored to be in the audience for the first ever public performance of The Harvey Milk Schools Project. GMCLA uses Harvey Milk’s life story to mix music and spoken-word to bring a message of equality to Los Angeles area high schools. The performance is compelling and poignant and brought the audience– which included State Senator Mark Leno— to its feet. As this program will be seen by thousands of students, I think this program is going to inspire and change the lives of young people! Huzzah, GMCLA!

What an amazing way to commemorate the first ever Harvey Milk Day (and what would have been Harvey’s 80th birthday). Other members of the audience included EQCA’s Executive Director Geoff Kors, Bruce Cohen (producer), and Dustin Lance Black (screenwriter) of the Academy Award-winning movie MILK.

If you know any schools which may benefit from the performance, here are just a few things GMCLA’s program offers at absolutely NO COST:

•Historical information and education about various genres of music, composers, and important social issues such as racism, discrimination, civil rights, and human rights

•Professional introductions from GMCLA’s diverse singing members about their careers, personal experiences with the chorus, and struggles as out, proud, non-stereotypical gay men

•A specialized, flexible program crafted to fit the scholastic and artistic needs of each individual school’s student body

GMCLA’s program engages students in the important work of comprehending and discussing the complexities surrounding human rights, civil rights, and the LGBT struggle for equality. This program actively promotes the reality that our community’s struggle for equal rights is not only universal, but an issue that has and can affect any group of people who find themselves in the minority.