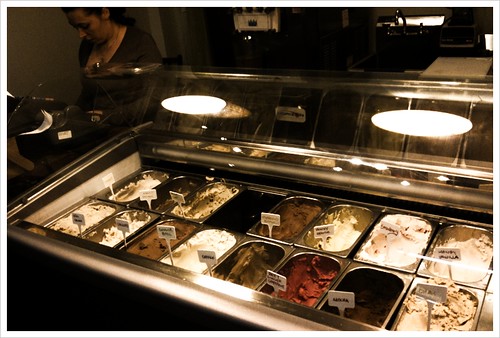 Finally got a chance to check out Kind Kream tonight, which is officially LA’s first vegan ice cream shop. While there are several shops in LA with vegan offerings, not the least of which is Scoops, Kind Kream is the first not to have any dairy based flavors. I say “finally” even though they have only been only for a few days, and under normal situations I would have been there opening day but things have been hectic, and they are in studio city so I think that gives me a pass. I had the Mint Chocolate Chip with hot fudge and it was pretty yummy.

If you are “in the know” you may have heard some of the kerfuffle about the fact that they use honey as a sweetener in some of their flavors. I think they have done a fantastic job explaining their reasonings, and I think that if you read through the comments on Quarry Girl’s post it will become extremely obvious to you that the vegan world is full of just as many whiney assholes as every other facet of society. There is no escaping. What I will say is that as someone who personally has been vegan for almost 18 years, I think there is much more important things to worry about and a place like this who is clearly trying to do the right thing should be supported. I also have seen several cycles over the years of “more vegan than you” folks come and go, and I say that because the people that scream the loudest and always want to point out what everyone else is doing wrong are generally the people who run out of people to attack, give up on veganism and find something else that they can embrace to try to make themselves feel better about their boring lives. No offense, of course.

(NOTE: Right after I wrote this they changed their name from Nice Cream to Kind Kream to avoid any potential fights with the dairy industry and the use of the word “cream” to sell non-dairy products. I updated the post accordingly.)