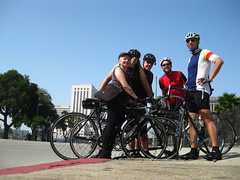 It started last year. I’d come off a pretty lackluster April bike-wise and I vowed to “Bike Every Day In May,” which I did… but that’s not the point.

The point is that besides all the regular workday commuting I did throughout that month-long endeavor, the weekends were for fun, involving a series of group rides that I organized, accompanied usually by a few intrepid souls (such as from left: Helen, Jared, (me), Hap and Alex pictured at right). So. with April’s impending demise I’ve decided to go sorta 2nd Annual up in here with “Bike Every (Satur)Day In May” and you’re welcome to come along for the rides, which you’ll find listed chronologically after the jump…

All rides will start and end at the same place: SilverSun Plaza in Silver Lake at the corner of Sunset Boulevard and Parkman Avenue. 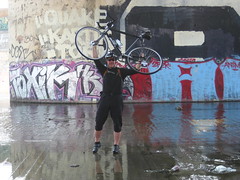 10 Bridges Ride (Backwards) – We’ll cross all 10 L.A. River bridges between Vernon and Chinatown, except unlike past editions of this classic zigzagger, this time we’ll be reversing course starting at Chinatown and heading south. Breakfast afterward at the World Famous Blue Star Restaurant in the Scrap Metal District where we will toast bridge builder Merrill Butler’s name several times. About 17 miles. Leaves at 10 a.m., May 1.

The Frank Lloyd Wride – A tour involving the famed architect’s four Hollywood Hills residences: Ennis, Hollyhock, Freeman and Storer. There will be climbing. Probably a stop on the way for nun-baked pumpkin bread from The Monastery of the Angels, with Musso & Frank’s after for flannel cakes, baby! About 20 miles. Leaves at 10 a.m., May 15.

The Two Rivers Ride: A metric-century plus extravaganza involving the breadth of the Real Eastside’s Whittier Boulevard to the San Gabriel River to Seal Beach to Long Beach and back up the Los Angeles River. Lunch at Wurstkuche. About 65 miles (halfway option available via Blue Line return). Leaves at 8 a.m., May 22.

Timelapse of the Two Rivers Ride

The Black Dahlia Historic West Adams Mosey – We’ll see where Elizabeth Short was last seen alive, journey to where her remains were found and then venture through the living history of the West Adams District. Tacos at El Parian. About 30 miles. Leaves at 10 a.m., May 29 (which also happens to be my birthday so let’s partay).

Timelapse of most of the Black Dahlia/West Adams Ride.

(Bonus) Memorial Day Ride: A trek across town to the National Cemetery in Westwood and then a visit to the Getty Museum. Lunch at The Village Idiot. About 30 miles. Leaves at 10 a.m., May 31.

Timelapse of The Memorial Day Ride.

I reserve the right to stop at and point out various socio-cultura-historical locations and/or read awkwardly from poorly organized notes gleaned from the googlenets in an effort to get you to share my appreciation for them. Helmets encouraged; functioning bikes and the tools/equipment required to fix flats expected. No rider left behind. Pace is casual/moderate. Laminated spokecards will be distributed — collect all five!

16 thoughts on “Bike Every (Satur)Day In May”