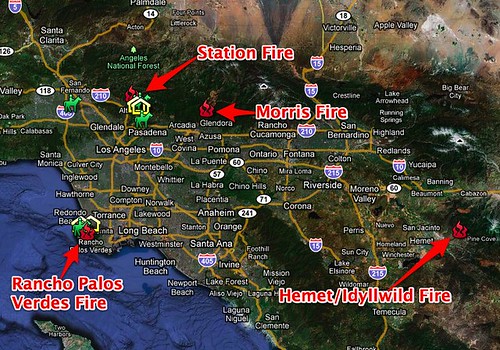 If you have eyes or a nose you’ve certainly noticed the insane amount of smoke in the air the past few days but I’ve heard plenty of people talking about not really knowing where the fires actually are, or assuming they are just some far off brush fire again. Well not so much. These ones are close, and getting closer. The scariest of the four, yes FOUR fires burning around us right now, at least to me, is the Station Fire which is located just north of Pasadena and Glendale (exact location) and is barely contained if at all at last I heard. Yesterday it was around 5% and at least this afternoon that had dropped back to 0%. Apparently this is news to some people as 911 is being flooded with people calling in to report seeing smoke in the sky – no shit.

If you live near this, check out the evacuation centers after the jump. Might be a good idea to know where they are ahead of time, just in case.

3 thoughts on “Those fires you’ve heard tell about”