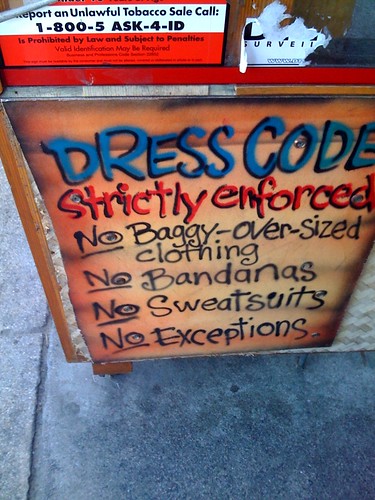 I spotted this sign outside of one of those beachy bars on Washington in Venice Beach and all I can say is WTF. Clearly the bar owners have some bias against recently fat people who spent all their hard earned money on a miracle weight loss program and haven’t been able to afford a new wardrobe yet. And what’s up with the bandannas thing? Look, every one of us feels bad for dogs who have hippes and beach bums for owners who think tying a banadanna around their neck is cute, but it’s not the dogs fault! Sure it looks like hell and makes you want to just rip the thing off yourself but the dog didn’t pick that out, the owner is to blame. They should ban anyone who thinks that bandannas as dog collars are a good idea, don’t punish the dogs for something they have no control over. That said I can totally support the sweat suits thing, anyone who leaves the house wearing one should be ostracized and made to feel as uncomfortable by society as possible until they run home and change into something less stupid.

10 thoughts on “Venice Bars Are Full of Rules”