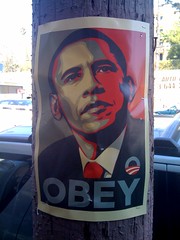 Thanks to commenter dziga on this post for bringing this to our attention. It seems that Mannie Garcia, the photographer who took the photo that Shepard Fairey based his illustration on was not working for the AP when he took the photo in question, says that the AP has no rights to it, and doesn’t want to fight with Shepard over the usage. Photo District News spoke with Garcia and says:

Garcia also questions whether the AP even owns the copyright to the photo. He says that he was not on the AP staff at the time the photo was taken, and never signed the AP’s freelancer agreement. He said he has had several conversations with AP managers in recent days about ownership of the image, adding, “I never wanted to fight the AP.”

Garcia says he worked for the Associated Press as a temporary Washington photographer for six weeks in 2006. He says he was not considered a staff member, and that he has never signed an AP freelancer agreement because he doesn’t approve of the terms in the contract. Asked if this punches a hole in the AP’s copyright claim, Garcia said yes.