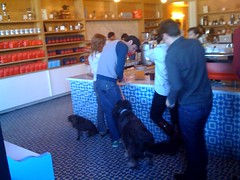 This morning I went to Intelligentsia to grab some espresso, which if you follow me on twitter you know is part of my daily routine. When I got there I noticed that a guy at the counter had a cute dog with him, and since my wife Tara has a thing for cute dogs in coffee shops I snapped a photo for her and quickly posted it to flickr. As the pic was sending I looked back up from my iPhone and saw the guy with the dog looking at me, he looked disappointed, but also vaguely familiar. As he put on his sunglasses and walked out I realized he was famous and probably thought I was taking a photo of him. I felt like an ass, but it was too late. I told a friend I was with about my faux pas and he, not being from LA, pointed out that in any other city the guy would have been mobbed for autographs and I shouldn’t feel too bad about it. It’s a good point, and one of the things I love about LA, but I still felt like a dick.

Skip ahead a few hours and Tara points me to a virtual throwdown happening on twitter between Ashton Kutcher and Perez Hilton. Not so much because of what they were saying, but because of how people were reacting and how she thought they might keep on reacting. She tweeted about it and said “I really hope that Twitter is still accessible to real people conversing and not just watching Celebs chat with each other.” Her fear, and a very valid one, is that suddenly her stream would be filled with normal people @replying to celebs trying to become “friends” with them, rather than just being themselves and talking to their real friends. If you want to see what I mean, just look at how many people are replying to Ashton or Demi. Soleil Moon Frye only joined twitter 13 hours ago and look at this!. This got me thinking about how that relates to my coffee shop experience earlier in the day.

Of course these aren’t the first notable folks to join twitter, just an example from today, but as the site continues to grow this will happen again and again. Maybe to some people an @reply or follow by a celeb is like a virtual autograph. In some parts of the world people will climb over their mother to fight for the autograph of someone famous, while in others people feel bad for even giving the impression of gawking. LA is kinda like a safe haven, for the most part celebrities can roam in public unmolested but the internet is the wild west. One of the reasons so many of us like twitter is it’s kind of a little safe haven online – we can talk to our friends and see what they are up to and the rest of the web doesn’t get in the way. But what happens when it does? What will happen when thousands upon thousands of people who have never been anywhere near someone of moderate fame are suddenly a simple @ away from them? Instead of logging in and seeing what my friends are up to today, will I only see them acting like dickholes trying to get the attention of some celebrity? Maybe. Maybe not.

Tara briefly thought it was the beginning of the end,but Wil responded noting “@tara I don’t think it’s zero-sum. The gawkers will soon get bored and leave, but even while they’re here the rest of us can still keep on.” I tend to agree, I think as more and more people start using twitter (and other social networks) some of those people are bound to be famous and some of those people are bound to be attention seeking idiots. Our own experience with all of them will rely on what we pay attention to, and in the same way I can read a magazine without reading one that tells me which starlettes are in/out of rehab today, we should all be able to continue using these sites without too much cruft. But what about looking at this from the other direction? Soleil seems genuinely excited about twitter and is probably going through the same thing many of us did when we realized the whole new world of interaction it enables. How will that be effected when she can’t see replies from her actual friends because she’s getting 100 replies a second from people she doesn’t know begging her to follow them? Or does that even matter, maybe it’s just one more thing to list on the cost of fame.

Regardless, it’ll be interesting to watch and here’s to hoping the hysteria is brief.

18 thoughts on “Celebs in public and on twitter, how will it end?”