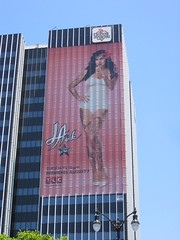 In a rare collision of adjectives, the LA Times has an interesting, sad, and funny story about the cubicle man’s war against supergraphics, i.e., those giant vinyl billboards that drape giant buildings and somehow stay flat despite the wind.  Our building had a supergraphic of something at one point; it obscured Partner on the Left’s view of the ocean, Partner on the Right’s view of the skyline, and my view of a giant mound of dirt that was once supposed to be the nascent signs of a luxury loft tower that thankfully did not get built. They were angry, I was indifferent about not seeing the mound. In any case, it was a temporary anger, as the sign was removed by the end of the day.

Other office workers are not so lucky.  In the City Council’s very limited ground war on billboard blight, these supergraphics are popping up like mad and office workers aren’t taking it lightly. David Allen, chiropractor at 10801 National Blvd, quickly created this site to pressure his building owner to remove the enormous Tropicana vinyl on the side of his building.  The problem is more than your run of the mill view-related lawsuit that you’ll see from prototypical rich people; as the article points out, these vinyls can significantly reduce the amount of light entering a room, which alienates customers and clients and impairs one’s ability to her job.

So, what does The Narrator do whilst the city sleepwalks into its fight over the constitutionality of banning billboards like these?