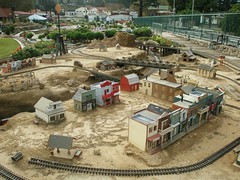 What is known as the country’s oldest and largest miniature train garden, the Fairplex Garden Railroad will have it’s Holiday Open House on December 14th from 11am to 5pm.

The railroad began as a special static exhibit for the third Los Angeles Fair in 1924. It soon became a small, hand built, operating miniature train, in true 1/2 inch scale. The small railroad continued to grow and in 1935, moved out of the Fair’s tent to its present 100X300-foot outdoor location where it remains today.

I wrote about my first visit to the Railroad, last year. It made such an impression on the entire family that we’re eagerly looking forward to visiting again this year. Why don’t you join us?