Hello friends! As you know we’re no strangers to Batman, and all things DC, so we’re totally stoked about the Dark Knight, coming out this Friday! So stoked, in fact, that we’re attending a midnight showing at the Arclight, an IMAX screening about twelve hours later and then various viewings with other friends and family over the weekend! That in mind, who has two thumbs, lives in L.A. and is even more stoked on the new Batman movie than us?

Who is this masked, singing wonder and where did he get those wonderful toys?

His name is Andrew Goldenberg, and we want you to do us a favor. We want you to tell all your friends about him.

Steve happened upon our fancy featured gentleman whilst par-oozing the interweb during a slow work afternoon. Having two million plus views, Andrew Goldenberg isn’t just another viral 1-hit wonder. A double-click here a single-click there… and we were smitten with the twenty-something LA local, whose magical riffery warmed our hearts and our computer monitors.

When we got a hold of Andrew, he was more than happy to provide a little insight into the methods and to spill the goods on the movie music of today. Being the huge movie nerds that we are, we jumped at the notion of interviewing Andrew for the betterment of the World Wide Web, and beyond.

Okay. So I’m in Colorado in the middle of nowhere in a hotel room that’s not really even part of the hotel I’m staying at. I was just coerced into taking an off-road trip into the mountains with maybe two gallons of gas in the car, with my two buddies I am filming a web series with. That’s called Comedy Road Trip on Maniatv.com. I am also part of the National Lampoon Lemmings on that site.

Mark and Steve: To start things off, what was your inspiration when you did the first video, Superman Theme Song?

Andrew Goldenberg: The idea came to me when I was filming a short called Nails with some friends in Van Nuys. I started singing to the instrumental part of some song and my buddy remarked how much he hated when people did that. I laughed because I always sing random words at the instrumental parts, even if it’s just making noises for the instruments. So I thought hey I haven’t seen anybody put words to theme songs before. My girlfriend was out of town for July 4th and I wrote the Superman theme song, filmed it, and edited it within that week. Now, each one takes me about five months.

I now know that Bill Murray did Star Wars on Saturday Night Live twenty-five years ago. 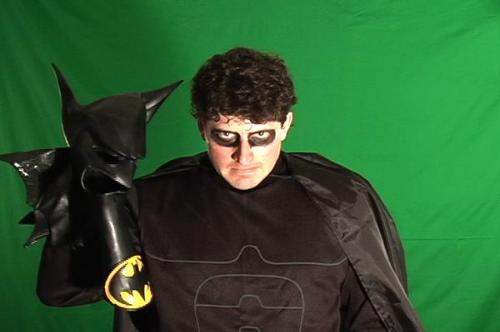 M&S: Tech question: What equipment did you use to make the videos? Camera/Tripod/Adobe Premiere/Wrinkly Green Sheet?

Andrew: I use a Panasonic PV-GS 120, Final Cut Pro, a wrinkled green screen I bought off Craigslist and a work light from Lowe’s.

M&S: Have you considered taking your parody theme songs on the road, in front a live audience?

Andrew: I never really thought about taking my theme song act on the road, but I have been offered places to stay by some of the people who watch them.

Andrew: I’m a huge fan of John Williams, obviously. I have such huge respect for all movie composers though. I don’t know about favorites but Rent for musical and Star Wars probably. I mean, come on, that had the main theme, Vaders theme, that great finale. All somewhat different and completely recognizable. 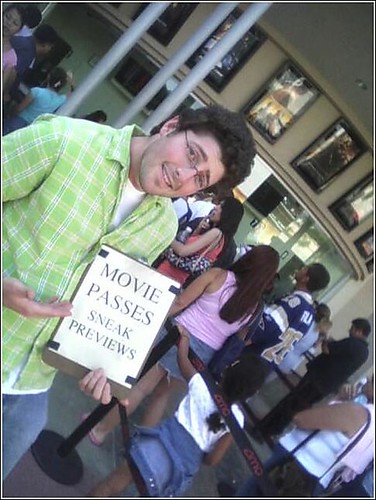 M&S: On your Myspace page, it says you’re an “Audience Recruiter”? Does that mean you can hook us up with free movie screenings?

Andrew: I am privileged to no longer be an Audience Recruiter, so I can’t give you passes. I edit with Steele Pictures and write for the National Lampoon Lemmings. And every once in a while, yes, I actually get paid to act.

M&S: Two months ago, you unleashed Indiana Jones and The Song of the Theme, what else do have in store for the coming months?

Andrew: Star Wars is next on my list as of now. It’s been requested a lot and it’s a challenge. It’s about a five-minute song but I think it’ll be fun.

M&S: Will you ever take requests? If so, might we request Jerry Goldsmith’s Gremlins theme?

Andrew: Gremlins is a good suggestion. I don’t think I’ve gotten that yet. The most requested are Star Wars, Jurassic Park, Rocky, Mission Impossible, and Spider-Man.

M&S: We’re clearly movie score fans, and feel that there hasn’t really been any new iconic themes since Lord of the Rings back in 2001, do you agree? If not, are there any themes of late worthy of your particular brand of parody?

Andrew: Interesting question. I honestly don’t really think I have heard an iconic theme song in a while. I have to think about it longer but it seems that they are too convoluted and the ones that were so classic a decade or two ago were simple progressions. That being said, the music at the end of the Dark Knight trailer makes me want to stand up and cheer every time I see it.

And with that he was gone, apparently he was off to wrestle Alligators! No lie.

We hope you enjoyed this Odd L.A. Spotlight!

Except where otherwise noted, all photo and video credit: Andrew Goldenberg