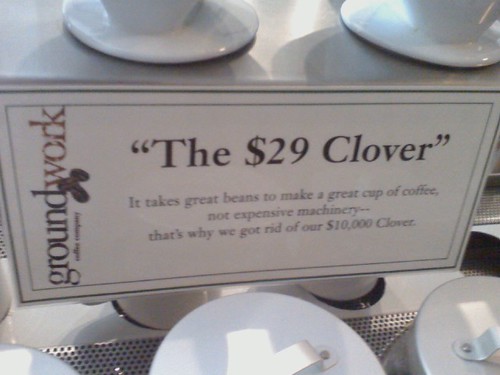 Coffee nerds around the world bow in awe of the Clover coffee machine, and ramble on about it’s $10,000 pricetag as proof of the superior cup of joe it produces. For a while it was big news that Groundwork Coffee in Downtown LA had one. Well, they don’t anymore. I don’t know if people just weren’t ordering it or what, but as you can see from the notice posted above they’ve scrapped it and are acting like it’s no big deal. Maybe it’s not, but I know more than a handful of people who will drive way out of their way to get a cup from that machine and since Intelligentsia in Silver Lake seems to be the only one in town now that’s where I’ll be sending them.

Update: Eric Richardson notes in the comments that this isn’t new, and can also be blamed in part on Starbucks.

13 thoughts on “No More Clover At Groundwork”