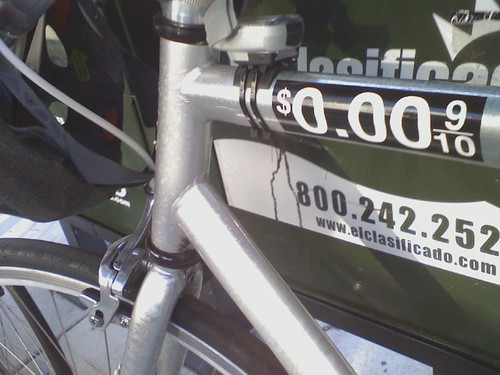 Due to the sweltering heat, when I needed to get from downtown to Hollywood today with my bike, I opted to take the Metro and save myself from a horrid sunburn. Now I’ve taken my bike on the train in the past and not including people who are traveling with me specifically, the most other bikes I’ve ever seen is probably 3. Today I saw 7. SEVEN. But it wasn’t just that, the folks with bikes were talking to each other and those around them about how the gas prices were so insane it wasn’t worth it for them to drive to work anymore and they suspected we’d all be seeing a lot more people on bikes in the near future.

I want to be clear here, these were not “LA bike culture” people, these weren’t Midnight Ridazz or fixed gear hipsters, they were just ordinary people who were looking for a cheaper way to get to and from work. One lady who was without a bike remarked that she’s ridden the train to and from work every day in the last 2 years and she’s never seen as many people on the trains, or as many bikes on the trains as she has in the last month and “every one of them is complaining about those damn gas prices.” Later on when I actually had to drive a car and I needed to put some gas in it I noticed a weird fellowship between the other people at the station filling up. One guy said “these prices are just insane, what are we doing” and another person responded “I dunno man, but if this keeps up I’m buying a bike.” I nodded and told them biking in LA is awesome and the first guy says “At this point I don’t care if it sucks, if it doesn’t cost me $80 to fill up once a week, I’m in.”

14 thoughts on “Gas Prices And Your Commute?”