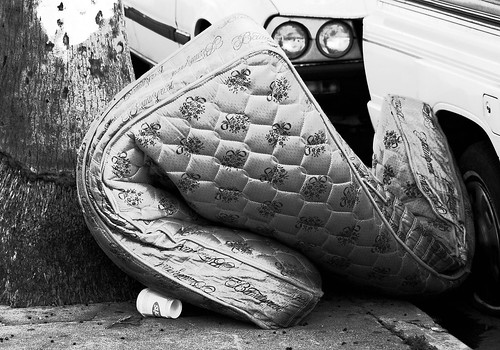 Julia beat me to the punch on raising this topic around hereabouts, but today the Times weighs in with an investigational piece on what I think is one of LA’s most pressing and scandalously overlooked problems: illegal dumping. Here’s a particularly telling bit:

Officials with the Department of Public Works, the agency responsible for maintaining the 800 miles of city alleys, said they were doing all they could to fight illegal dumping and keep alleys clean.

But records show that the number of arrests by department investigators for illegal dumping dropped from 359 in 2002 to 55 last year. The number so far this year: three.

Meaning our no-longer-so-fair metropolis is on track for a stunning six arrests for illegal dumping in ’08. Of course, it’s hard to blame Public Works for the fact that we’re on the path to a Robocop-esque future where the streets are full of burning piles of refuse. After all, it’s not their fault that their budgets are being rerouted to pay for more cops, and it’s not their fault that a sizable percentage of Angelenos are are self-involved fuckerheads and would rather spread urban blight than call for a bulky item pickup or pay a pittance to take garbage to a dump. Unfortunately, there’s not a lot of discussion regarding solutions in the Times‘ article, and it’s not something I’ve seen addressed in any detail by anyone in city government. I wouldn’t expect to see a change any time soon.

2 thoughts on “Times on Illegal Dumping: Worse Than Ever”