As you may know, Governor Schwarzenegger (finally) declared drought conditions in California. Typically, this was yet another short-sighted proclamation, geared mostly toward the agricultural business in the Central Valley. I do my best to save water, not only because I want to do my part to conserve, but also because I can not afford the water bill. I installed drip irrigation on the plants in the backyard, but the front yard has yet to be hooked up, even though I have all the bits. We have a washing machine and a dishwasher, both with excellent EnergyStar ratings. Growing up in Southern California, I’ve formed habits that include taking short showers and collecting excess water, turning off the water as I brush my teeth and making sure I reuse what I can. 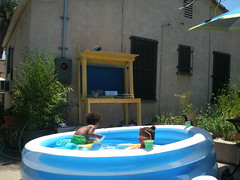 Today, is slated to be about 88, which means it will get about 94 in my backyard. With two little ones, this is a prime day to set up the pool and splash around. I have a small 270 gallon inflatable pool. When you think in terms of gallons, that’s a lot of water. Since I’m a big lady, the water displacement is very visual, so I don’t fill the pool to the max. One thing I do to conserve water, is reuse the pool water to irrigate my inedible plants. At the end of the day, I place the sump pump hooked up to a water hose on the pool bottom, then I either attach a sprinkler or a gun head to the other end. Because the sump pump is slow, this allows the water to filter into the soil at a slightly faster rate than the drip irrigation. 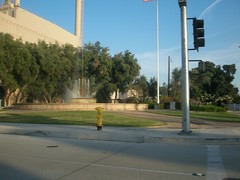 Mayor Villaraigosa has been making a lot of noise the past year about water conservation, but as you drive/walk/bike around the city, you’d hardly know that water levels are low. You’ll see public spaces being watered in the middle of the day, with runoff flooding the gutters. The DWP still has all it’s fountains running and though they say it’s reclaimed water, it’s reclaimed water than could be used elsewhere. A December 2007 podcast on the LA Daily News, shows just how little is really being done in Los Angeles regarding this issue. On June 10, 2008, the MWD’s (Metropolitan Water District of Southern California) Board of Directors declared a ‘water supply alert’ (PDF) throughout the 6 counties that they serve.

This is a serious situation. The need for conservation is very real, particularly with the governor’s drought announcement last Wednesday [June 4]. Now that the drought is official, consumers need to realize that water rationing looms should voluntary water-saving efforts not prove enough, particularly if we faced shortages that compelled our board to implement the district’s recently adopted supply allocation plan.

7 thoughts on “Water and California”