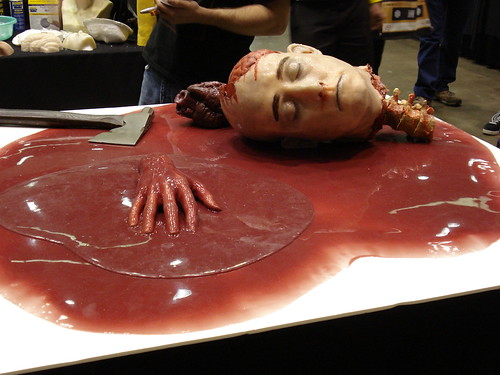 Hello friends! In Part 1 of our Fangoria Weekend of Horrors! adventure, we waded through enormous crowds, recycled wisely and saw at least enough cult icons to play four-on-four on a half-court.

Just as our ongoing expedition up the mountain of good times was about to reach it’s peak, we caught a snag that sent us plummeting hard and fast, matched only by the graceful nose-dive Mr. William Shatner performed in the opening scene of Star Trek V.

Read on to see the true horror revealed and limits Mark and Steve are prepared to test in their ceaseless pursuit of a truly magnificent Sunday.

Warning, do not click if bugs, sudden changes in scenery or grown men holding hands terrify you.

Pictures by Sara Zaragoza and Mark Englert. If you click them, they will biggify. 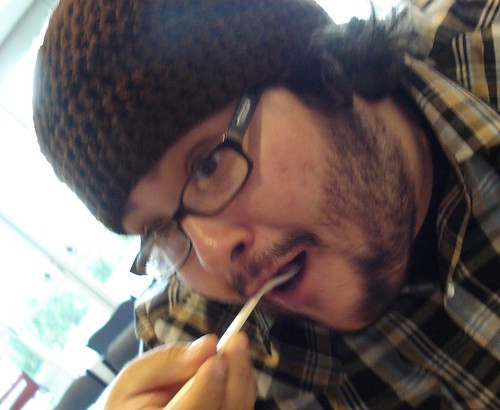 When we last saw our heroes, Steve was wrestling with a phantom dread that soon materialized.

It seems a new friend had made his way on to a cutlet of Steve’s delicious Asian chicken. It was at that moment, upon discovering our new tomodachi, that a unanimous feeling floated over the transom of our group’s shared psyche. 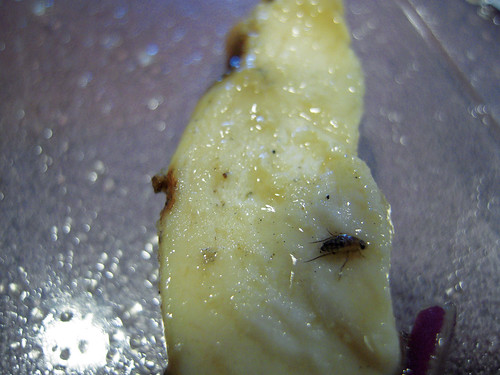 It was the cold sting of pure disgust. Not just because of the dead insect death-twitching away in the syrupy fowl.

Don’t get us wrong, we’re huge fans of the horror genre. Watching B-list celebrities pay for their own cheap lunch was worth the admission price alone! But this con wasn’t cutting the mustard friends. We’ve been to many smallish local conventions that sliced and diced the damn mustard, and even slapped it around a bit!

So what are three able-bodied, twinkle-eyed, twenty-somethings to do when tethered to a half-joking obligation to have the best day ever? 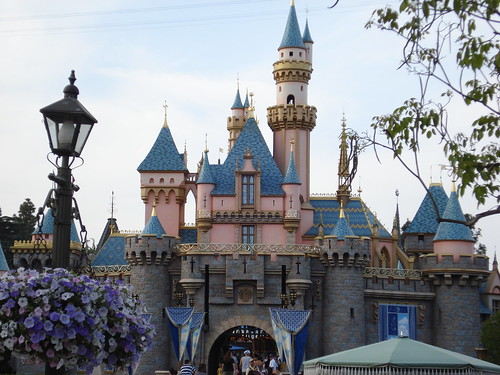 Surely, any repugnance left over from Fay-wee-ho was magically quelled. It was as if some friendly mouse-like creature had tickled us till we peed, and we liked it! 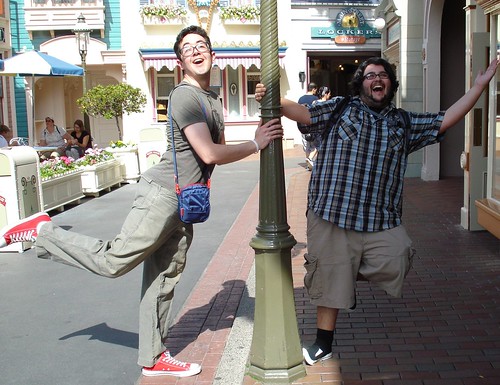 We all bought annual passes. And in turn, handed our weak souls to the blessed house of mouse! 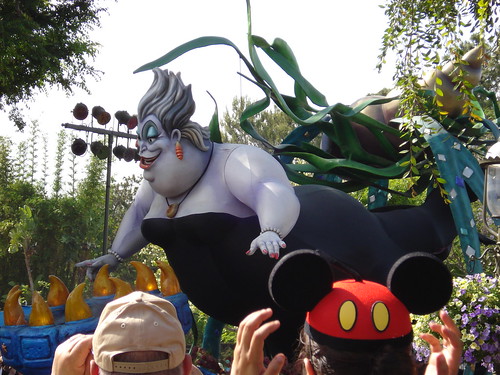 We got there just in time for a parade featuring floating likenesses of popular purple Disney Characters, what luck! 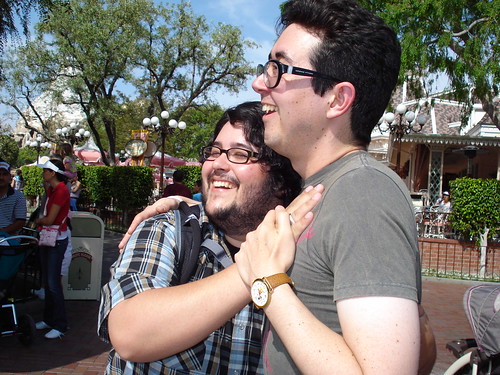 We bask in the loveliness and reflect on other purple times we’ve had together.

Having not been to Disneyland since New Year’s Eve, 2008, Mark decides Steve needs a quick tour. 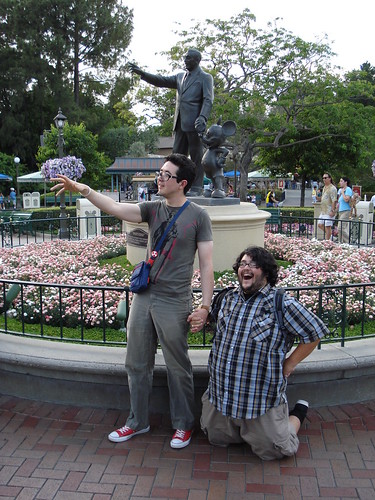 This is where Walt Disney’s frozen carcass is buried. One day, future generations will feast upon it to gain Disney’s legendary wisdom, agility and keen palate.

We decided to mosey on over to the most jungle-riffic area in the park, Tomorrowland! 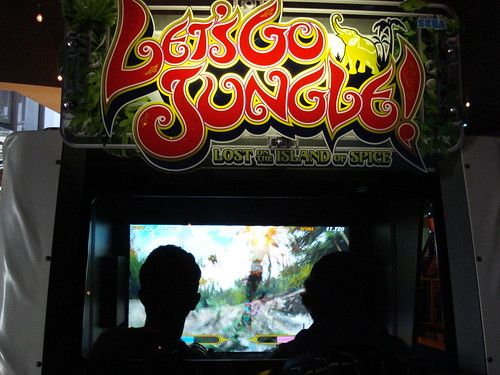 We played this stupid-cool, low-def arcade game called Let’s Go Jungle!: Lost on the Island of Spice, which challenged our hand eye coordination and our concept of the word “jungle” as a noun rather than a verb! 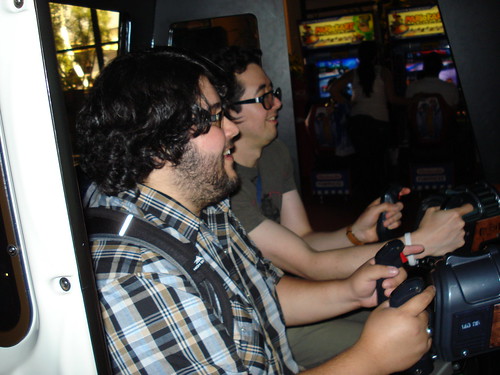 After slaughtering many an innocent, prehistoric mutant spider, we considered our tokens well deposited and decided a tasty beverage was in order.

While walking through the coffee and tea shop on Main Street, Mark heard some odd ringing and answered the old-timey phone. 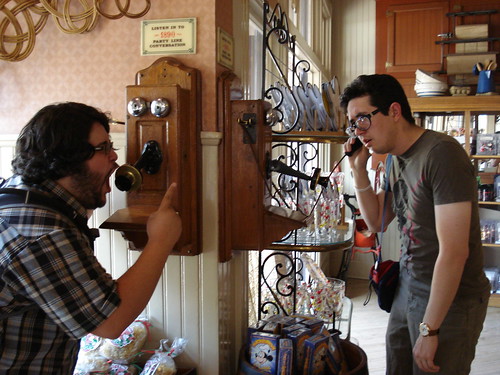 Fully expecting a sales pitch justifying the ruination and gimmicky substitution of the Disney Gallery, Mark picks up the phone and instead, hears a familiar, high-pitched squeal.

“What the shorts are you guys doing wasting your time with video games, and lesser goings ons? You’re in Disneyland! Get on the damn rides already, you kooks!” 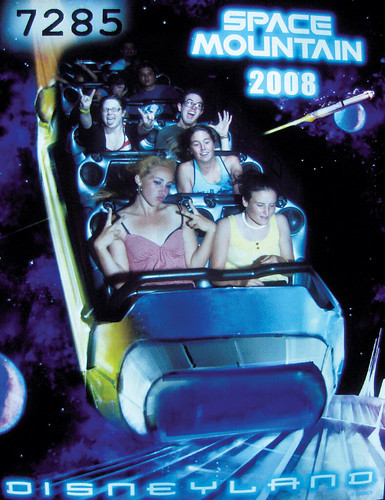 But where’s Steve? No, he did not go flying out of the the empty seat where he ought to have been. Steve had to feed an addiction he’s been trying to kick since he almost graduated high school. 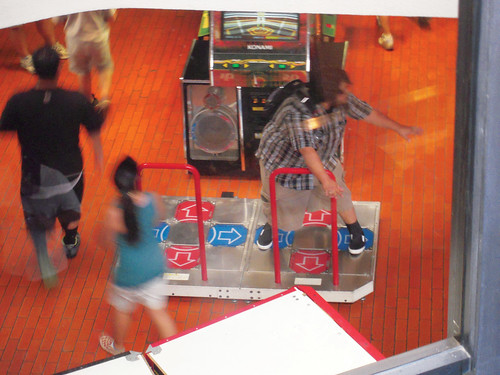 “Hello, my name is Steve and I’m an imaginary Dance Dance Revolution addict. I jump up on the machine to covort and spin about without putting any money in. I thought about joining a twelve-step program, but it seemed like a counter-intuitive way to treat a dancing addiction.”

Continuing our space-themed odyssey. We went on Star Tours and during the ill-fated ride to Endor, shouted out the beloved Star Wars catch-phrases, “This is where the fun begins!” and “Now this is pod-racing!”

After being booed off the ride, we decide to take our anger out on a fellow named Zurg who’s been giving us Space Rangers quite a bit of grief lately. 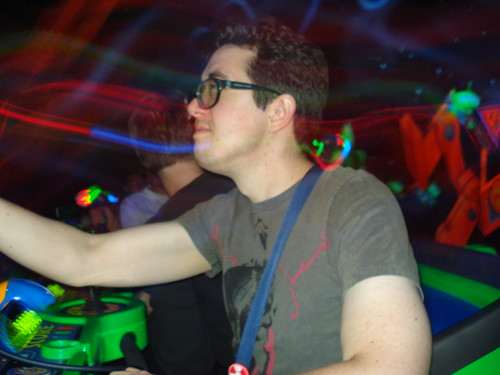 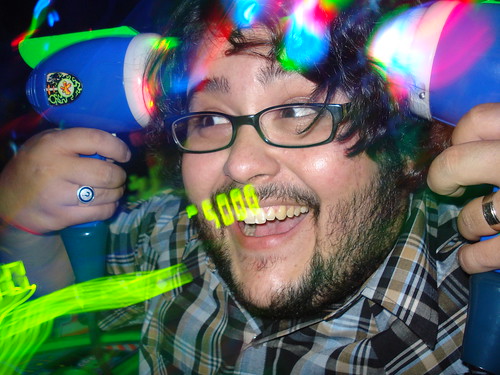 Steve finds a new way to achieve a high score. It seems that by pointing both guns to his temple and removing his pants, Steve can trick the system into awarding him no less than Level 2 status! 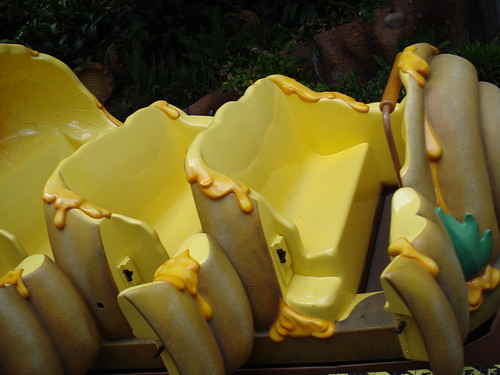 We then made a bee-line to the seemingly peaceful, bear variety show-killing, slow-rocking, infant-pleasing ride: The Many Adventures of Winnie the Pooh! 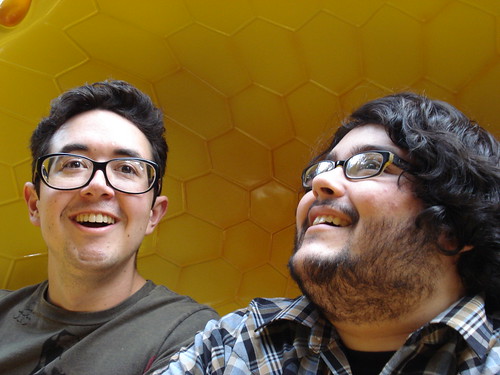 The boys are cheerily hypnotized by the bright yellows and burnt ambers of the wheeled honeycomb, about to embark on what will no doubt be a relaxing romp through the Hundred Acre Wood.

Sara, however, is skeptical and senses a deep disturbance. As if millions of voices cried out in terror, were suddenly silenced and then regained their cool and begun to casually discuss the origin of the smoke monster.

What horrors awaited your thick-glassed heroes? How could said horrors possibly be in a children’s ride?!

Tune in tomorrow Monday for the exciting conclusion to: