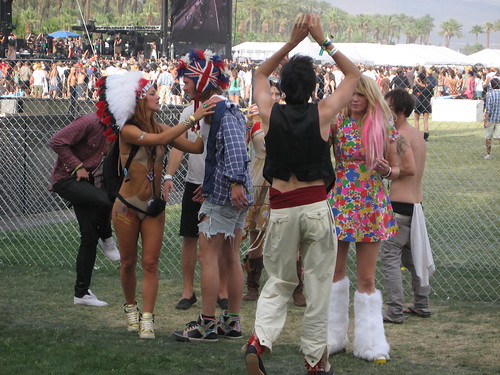 OK, Los Angeles. Sorry that this is so late, but there was sleeping to be done, highway races to the airports, and long flights to be caught. Now that Virgin America’s new route has delivered me home safely, I’ll drop in a few last notes as Coachella fades away, Brigadoon-like, into the mists of improbable polo fields for another year.

(after the jump: the Shout Out Louds, My Morning Jacket, Roger Waters, Black Mountain, and more)

Usually it strikes early and often, but it really took until Sunday for me to find my first bandcrush of the festival. There they were, playing the mainstage as we shuffled through security at three in the afternoon. Adorned in flowers, with the girl on synths looking like a modern greek goddess and the rest of the band boasting the impossibly great bone structure of a Scandinavian country with a long history of good socialist healthcare. The Shout Out Louds were one of those groups that I’d always meant to listen to and occasionally confused with Shout Out Out Out. They’re a little like the Smiths mixed with a field of dandelions. Toward the end of their set, James Fearnley from the Pogues joins them to provide athletic accordion accompaniment to one of their old songs. By the time they’ve closed out, with the lead singer joyfully rocking a tambourine and double cowbell I’m writing their names all over my notebook. Or at least I’ll be adding them to my iTunes queue.

Elsewhere, Manchester Orchestra seem to be using the healing power of angst rock to release some of their pent up anxieties and the unknown pains of being a teenage band from a Southern metropolis. It’s emo, but in a fairly good and catchy way.

I’d been looking forward to seeing the Field if only because whenever I listen to their (his?) latest album, I sort of feel like I’m losing my mind about halfway through. This tour was supposed to be a “full band” version, but the heroes of border control put a stop to any of that. The show ended up being cancelled because the band couldn’t get into the USA at the last minute. Would it have been too much to just drop one of their CDs into the soundsystem to appease a Gobi Tent full of disappointed fans?

Back at the Mainstage, Stars seem to have read my mind. Unlike too many others, they are playing all the hits all the time. Their songs are ever so romantic and well produced. As they ring out across the still sparsely attended festival grounds, I wish that more people had shown up to catch their set, but they seem just happy to be occupying a stage formerly graced by Prince.

It’s hard to complain about the early lack of crowding on Sunday. Getting around and staying more relaxed is a whole lot easier when you’re not jostling, dodging, and queuing for food and drink in competition with too many other people. Crossing the grounds, I think that I make out Does it Offend You, Yeah? dedicating a song called “Make Out” to Elliott Spitzer. That, however, was far from the oddest imagery of the day. First, because we were on our way to see Gogol Bordello. The lawn was rollicking, but I suspect that none of them were having more fun than the boisterous gypsy-punks on the big stage. This is not to say that the menagerie of scantily clad, fuzzy booted, and otherwise costumed sextet on a picnic table near the edge of the VIP garden weren’t giving it their best effort to upstage the band.

The air was relatively still, but luckily Emily Haines brought a pair of wind machines to give her hair the perfect windblown look to complement her shiny spandex microdress throughout the Metric show. Like the last time they were at Coachella, a large crowd had gathered to watch as their instruments struggled against the climate. It was the last sunny set of the festival, and once again her classic synthesizer was acting up and there was a weird bit with a guitar appearing out of nowhere. These technical difficulties didn’t dampen their enthusiasm, and her riff about how she was proud to be a woman and proud to play an instrument that acted like a woman was more than enough to keep fans enthralled.

Next up was the question on everyone’s mind: what the fuck is Sean Penn doing on the Mainstage at Coachella? (really, even his mom wanted to know). It turns out that he was there to let the youth know that his generation had failed so now it was their (our?) turn to bring volunteerism revolution to the country. He invited everyone to ditch their day jobs and pile into a caravan of biofueled buses bound for New Orleans. Promising food, campfires with Ben Harper and Everlast, hard work, and a return trip a week later. Also: voting is cool. And: a Spicoli catchphrase for your attention.

Thankfully, his speech was concise. My Morning Jacket were, for me, among the biggest draws of the day. I’d seen them before but was completely blown away from the moment they started with insistent It Still Moves announcement “One Big Holiday” (again, the simple way to win my heart at a festival: play the goddamn hits early. We all win.) Can we call them golden guitar gods in spaceboots, or has Almost Famous made it impossible to say that unironically? Either way, Jim James and company are the real deal. Seeing them move from their old rootsier material, through reverb and synth-enhanced newer material, to a closing song that may have employed some sort of alien technology, I kept thinking that theirs is the exact kind of music that’s made to be played outdoors. Having it coincide with the sunset (which, as far as I’m concerned is the most magical Coachella set time of all) made it all the more perfect.

Um. Then there was Roger Waters playing for a thousand years. Apparently Coachella wizard organizer Paul Tollett is a huge Pink Floyd fan. The set times had been arranged such that nothing else was playing at the beginning of Waters’s epic set. So if you were at the festival at 8:35, it’s almost certain that you’d be drawn into at least a little bit of this as part of some mission to convert the youth to the greatness of decades old rock. In some ways, it must of worked. The field that had seem relatively abandoned during the afternoon had quickly filled with fans who spread far and wide before the trippy video montage awaiting them.

I’d hold this kind of coercious against him, but Tollett did also bring us things like a reunited Pixies opening for Radiohead and Daft Punk’s miraculous pyramid; so I’ll give him this one. While I wouldn’t classify his show as a circle of hell, I found it only tolerable background music while drinking a few beers on a table with a view of the gigantic movie screen. I assumed that this might all be TOTALLY AWESOME if you already loved Pink Floyd, but other devotees described it in terms of the disappointment of hearing beloved songs played by an uninspired cover band. Although I perked up a bit when he started projecting images of dictators, an embarrassingly bad Comic Life accompanied new song inspired by his teenage years in Beirut, and that liberated pig, I was not eager to stick around for the encore performance of Dark Side of the Moon.

Instead, a friend and I escaped to hear a different kind of stoner rock from Black Mountain. Their throbbing organ, psych-fueled guitar, and ragged vibrato at least provided an end to the festival that was a new take on something old rather than a replay of a classic.

I’d really intended to stick around for Justice, but once again the big Sahara tent was packed by the time Chromeo started late. Even though I’d missed seeing them a couple times in the last year, I didn’t think that I could face the crush bound to result from the mass migration to once Waters ended his set, let alone persuade my ride to stick it out through the second half of Dark Side just for the chance to not see the French duo sending attendees into one last late night dance party. I’ll catch them next time around. From the looks of the spotlights and low rumbling bass lines audible from our house, I think that they left the festival with some curfew violations.

And that’s all for my Coachella experience for another year. It provided a great kick off to the summer concert season and gave this Seattleite a much-need infusion of warmth and sunlight.

2 thoughts on “Dispatch from Coachella: Sunday”