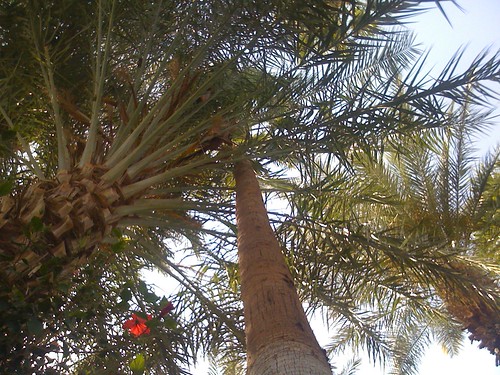 When last we left, you found me still acclimating to the warm dry air and the welcome respite from Seattle’s Narnia-like winter. Sun, warmth, the absence of rain, and mountains just outside my backdoor looking like a staged backdrop? What is this magical world? Also, there was a bit about shuffling across a grassy festival grounds trying to take in some music and art. Shuffling is actually a good term for what goes on here. Although a genreist could make a good weekend for herself, sticking to the dance tents, techno village, or mainstage rock stages exclusively and have a perfectly good time, the breadth of the music on display is really well suited to the overstimulation-seekers.

The other thing that Coachella is made for is people who don’t mind taking in a high-energy show in the middle of the afternoon. The Black Kids, for instance, are thrilled to be back in the states after a long, damp, tour in England. They’re sweating “like someone’s drunk stepfather” and couldn’t be happier. Live, they nearly live up to the ridiculously catchy sloppy funk standards of their short EP from last year. Even in the face of technical difficulties, they happily improvise a singalong while broken strings are repaired. Like everyone else, they hold off on the big hit until the end of the set, keeping those who want to be told that they won’t be teaching our girlfriends how to dance with us hostage for set. I hate to be one of those people, but goddamn it bands. How about you play the songs that we love up front once in a while?

Next door, Dan Deacon is killing in the next tent. He’s down off the stage, in the midst of a crowd who can’t imagine giving him an inch of breathing room. Kids are packed up against the overwhelming speakers with ears plugged, goofy smiles on their faces, and sweaty limbs flailing. The overwhelming bleep bloopery dancing goes on for a while and then Dan convinces everyone to form a tent-sized circle, for a whirlpool of jubilant high fives. I dash out of the set when he’s orchestrating the next series of team building games — something about a wave of joined hands sending a gauntlet of dancing through the crowd.

And back across the lawn, there’s indie rock troubadour Jens Lekman spinning ultra-charming yarns about dangerous cabs, indifferent Spanish girls, and the way that the ocean can make you feel stupid. Backed by his usual a harem of young women (Jens:Sufjan::__?__:Illinoisemakers) on strings

(one does suspect that their violin was not made for temperatures in the upper nineties) and drums, Victor on an array of samples, and a backup horn section, he plants the seeds of revolution with a suggestion that we spend the evening breaking into gated communities. Only if you bring the trombone, Jens.

Speeding back to the mainstage, I catch a bit of Architecture in Helsinki closing their set with “Heart it Races”. As usual, I wonder how they went from the twee-ist band in all of Australia to some sort of trailer park methlab funk machine in the span of one album. As the weird jam comes to an end, they gather the crowd to snap a picture for mom.

For the next couple hours, it’s double twin super rock power time on the Coachella stage. The Deal sisters seem beatifically happy to be playing and we’re all thrilled to see them back together again. Next are Tegan and Sara. From their bio, I’d always foolishly assumed that Canadian twin sisters = quiet strummy folk, but in fact they and the rest of their band were all sorts of poprocky goodness.

I also worried a bit about Vampire Weekend and their ability to survive in the sun. But they ditched the oversized sweaters, rolled up pink shorts, and encouraged the audience to dance to afro-infused pop so long as it didn’t cause them to overheat. It’s their first festival, and they’re very gracious. It turns out that WASP pop is made for the sunshine. On a day without oversold attendance, their set was among the most crowded.

Later, as night is falling it’s time for the Raconteurs. The only trace of irony in this supergroup is found (possibly) in Jack White’s curly sideburns, but beyond that they’re just an earnestly huge rock band. Usually, when bands throw in traces of the seventies, it’s with a smirk or a nod, but these guys really mean it. Under a tent of white spotlights, they slice through the night with big guitar heroics.

The only act that I saw from top to bottom was the Swell Season, who you probably remember from Once. As Glen Hansard opens with a couple solo songs, I can’t help but wonder whether he can afford to pay someone to make a fleet of pre-destroyed acoustic guitars now that he’s got an Oscar. Even when bandmates from the Frames, and co-star Markéta Irglová join him, they are all faced with the unhappy challenge of being louder than the Raconteurs. They take up the task with good humor, admitting that they are probably too quiet for the festival. It doesn’t dissuade the true believers who stay long enough to wipe tears away from their eyes while committing “Falling Slowly” to digital video for the ages. They round it out with Pixies cover and guest drumming from the National. They have to be among the most appreciative and compelling people I’ve seen all day.

Sharon Jones and the Dap Kings bring a touch of much needed soul to the proceedings. Their old-school late-career breakthrough success seems entirely improbably, yet there they are with a thrilled crowd eating up every note. She pulls a guy onto the stage with her for a seduction number, and the only possible conclusion for his lack of enthusiasm is a very jealous girlfriend waiting in the wings. She shakes her tassled dress, feeling like Tina Turner. Miraculously, she manages to turn her closing number — one about her ancestry of enslaved West Africans and mistreated Native Americans — into a celebration of dancing for a breathtaking finale.

Oh, and then Jack Johnson played. It’s nice enough, but felt a lot more suited to a warm lazy humid day, than a cool end of the night. We cut out early, hoping to beat the traffic, aiming to dodge the army of flyer-ers (one enraged girl screams at them to just think about the oceans), and eager for a few minutes in a hot tub to rejuvenate for two more days of all of this.