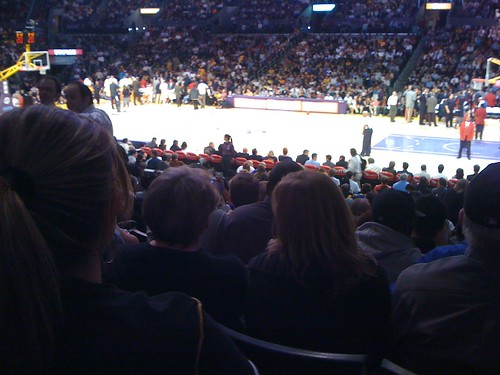 Went to the Lakers Game last night.  They won.

Our lawyers threw us their tickets and we had a nice time.  It was the second Lakers game I’d been to.  The last time was when Shaq had just left and the team and the fans were a little down in the mouth.

These were pretty good seats, 16th row and had a face value of $230.  So it’s just under a grand for a family of four.  <gasp!>  But I guess theoretically one can get $10 tix, but essentially the lower tiers and the boxes are all in the corporately priced range.  The third tier, aka the nosebleeds, is for the common man.

My Ninja partner Douglas did the smart thing and took the subway to the game.  I drove and had the privilege of paying $20 for parking.

The crowd was pretty into the game, lots of clapping and cheering.  The announcer was still creepy — after the Laker Girls do a dance he intones lecherously “LLLLLLLAKER GIRLSSSSSS”.

Our tickets got us into the Royal Room, which is just a bar with overpriced food and drinks.  But they add a velvet rope, so it must be cool inside.

I left with a lot of the fourth quarter remaining.  The game was fairly in hand and I didn’t want to wait in traffic.

Overall, even with free tickets, it’s not something I’d do regularly.  The food and the parking, even by sporting venue pricing, is a little on the high side.

And it’s a little crazy that flying two people to spring training and catching a game is cheaper than two Lakers tickets.

Such is life in LA.

One thought on “Lakers Report”