In case you hadn’t heard, Reuters (and therefore, every other news service in the world) is reporting that Roger Waters’ pig has been found. Two couples in the Coachella Valley will split the $10,000 prize and each get Coachella Tix for life. Apparently the pig tore in half; one pile of plastic landed in one yard, and another in someone else’s. Which means we’ll find the wreckage of the plane that hit it in the next day or two on a remote mountainside.

I’m disappointed and confused. Disappointed because I thought that pig had some serious wings when it lurched into the sky I was hoping it would end up in Uruguay, not just down the street. And confused because I’d thought the reward was for the pig’s safe return. Unless this is a new form of the word, a pig in two pieces isn’t safe. It’s more … well, butchered.

The Ferris wheel at the Santa Monica Pier has been sold on eBay to a real estate investor from Oklahoma City. Oh, and the wheel is located in something called Pacific Park. Did anyone know that was the real name for the amusement park on the Pier?
END_OF_DOCUMENT_TOKEN_TO_BE_REPLACED

I just walked down the street to a shop on the corner of 4th and Main and was in line behind an LAPD officer who was advising another customer to avoid Downtown if at all possible. As you might be aware tomorrow is the scheduled May Day Protest and the offer suggested that all of downtown will basically be gridlocked from 10am to 6pm at least. The other customer noted that she had an appointment downtown around 10am and asked if the other people trying to get there would be more than an hour late and the officer corrected her noting “hours” were more like it. So, that said, if you are planning to pass through Downtown tomorrow you might want to push that off to another day if you can. And if you work Downtown, I’d say forget the car and look for other ways to get in and out.

One of my favorite L.A. bloggers is Militant Angeleno and though I’m waaaay late in getting to his Monday post, it’s better late than never giving him a shout-out about his dedicated endeavor to go find the flow of one of Los Angeles old mid-city waterways. Starting from Shakespeare Bridge between Los Feliz and Franklin Hills, he ventures south into Koreatown on a trip to find what lies beneath. I don’t know what’s more awesome: the journey or what he discovers of L.A.’s past and present along the way:

The creek ran south-southwest, behind the Ralphs Supermarket, the Shatto 39 Lanes bowling alley and the Islamic Center of Southern California, then running west between Wilshire and 6th St.

The constant flooding of 6th and Mariposa (pictured left, circa 1920s) was one of the reasons for turning the creek into a storm drain. Sound familiar?

Today, the 6th and Mariposa intersection is home to “DWP Distribution Station 61” and, until recently, an establishment called “Creekside Cafe.”

And on the flip side… nothing. Your call is put on hold indefinitely. Officers arrive after the crime has been committed, if they arrive at all. Everyone thinks your problem is someone else’s problem. There is no one to help you. 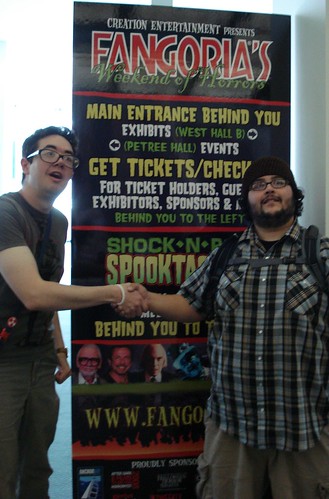 END_OF_DOCUMENT_TOKEN_TO_BE_REPLACED

I’m not sure the exact angle to take on this, but I blame Jack Valenti somehow.

Knowing that I used to work at Sunset & Vine (some people still think I work there), I got several messages from people warning me about a large fire currently happening in the vicinity at Hollywood & Vine (google maps link is approximate; 6263 W Hollywood Blvd doesn’t currently come up on Google Maps).

The LAFD Alerts are as follows:

LOS ANGELES — Los Angeles firefighters are battling a major blaze inside a restaurant bar at the corner of Hollywood Boulevard and Vine Street in Hollywood.

The flames broke out early Wednesday in a building being renovated at the famous Los Angeles intersection of Hollywood Boulevard and Vine Street, in the 6200 block of Hollywood Boulevard. KNBC reported that the building is the location of the Basque nightclub. Los Angeles city fire officials said the restaurant/bar where the fire broke out was unoccupied.The fire was called in at about 5:30 a.m; 4-foot flames could be seen shooting through the roof at 6 a.m. A plume of smoke could be seen for miles. KNBC’s Robert Kovacik said firefighters expected to be battling flames until at least 8:30 a.m.

UPDATE: Buses are being diverted; Hollywood & Vine Metro stop is currently closed open. Expect traffic to be affected for the rest of the morning.

ASIDE: This is the second major fire in that vicinity this week. Did you know that just a few blocks south of Hollywood and Vine, Off-Vine caught fire during dinner time this past Sunday? They are now closed until further notice.

Meet Lae. She lives in South Los Angeles and just like my Northeast LA neighborhood, she has a serious lack of healthy food options and quality produce. She embarks on a journey via bus to get to 3rd and Fairfax (link goes to a video) to do some grocery shopping.

South L.A. is a “food desert,” with few supermarkets and a lot of land in between them. This video is the true-to-life tale of an epic journey, two hours–by bus, chronicling the extraordinary efforts of Healthy Eating Active Communities (HEAC) student Lae Schmidt to obtain the quality and variety of fruits and vegetables she desires. Not content with conditions as they are, Lae sits down with her local Councilwoman to discuss what can be done to improve healthy food access in their community.

Today, I had to go to my dentist off Fairfax and Wilshire and while in the neighborhood, we dropped by Farmers Market. Since moving to El Sereno from the Fairfax district last year, we’ve probably gone to Farmers Market 7 or 8 times. That’s the only thing I miss about our place; being able to walk to Farmers Market for our near daily grocery shopping. I miss being able to get high quality meats and produce at affordable prices. El Sereno has a lot of things going for it, but quality and healthy food is definitely not one of them.

The local grocery stores leave a lot to be desired. When you’re used to getting imported cheeses from Monsieur Marcel, going into the Food 4 Less to choose between Land O’ Lakes or Von’s brand blocks of cheddar really knocks you for a loop. So, we’ve adapted a bit; I grow a lot of the produce my family consumes. We go to South Pasadena where there is Trader Joe’s, Nicole’s Gourmet Cheese Shop and a pretty good farmer’s market on Thursday evenings–all of this right at the Mission Station on the Gold Line. As much as I grumble about having to drive all the way over there, I wonder if we’d still go that distance if we had to take the bus.

Thanks to Lae, I know what my monthly letter to my Councilman will be about…maybe this one won’t be ignored.

Last night some of us Metbloggers got together for drinks downtown at the gorgeous Hotel Figueroa. I’d never been there before, and it is definitely worth a visit. Several photos below the cut, all taken in the basement. Which is where they keep the Ladies’ Room. Yes, there are pictures of the bathroom. But it’s a pretty bathroom.

The pictures are as big as they get, since I took most of them sans flash and they’re a bit blurry.

END_OF_DOCUMENT_TOKEN_TO_BE_REPLACED 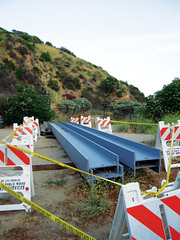 Hello friends, Mark here. David Markland and I were just having a lovely evening hike in the controversial Runyon Canyon when we came across a pile of girders by the old tennis courts.

Last week, there was a back hoe parked in the tennis courts… anyone know what they’re doing up there?

Stepping out onto the porch this morning to ready my bike I was pleased to feel the temps had cooled down from the last several days and upon grabbing my floorpump to top off my tires I brushed a lantern that turned out to be the sleeping quarters for a whole mess ‘o green lacewings, all of which flitted away with the exception of this one at right that settled on a column and allowed me to snap its moment in the sun (click for humongification):

With that I have a few fun facts I found out about green lacewings (but I’ll drop them in after the jump in case this crap bores you senseless because what you’re really looking for is another recap from some festival that happened last week down in Indio):

END_OF_DOCUMENT_TOKEN_TO_BE_REPLACED

On May 8th, 2007, a blaze tore through Griffith Park, decimating acres of wildlife, leaving behind an ashen sheet covering hillsides, and the occasional skeletal husks of trees and animals.

Photographer Colin Brown was one of the few residents who was able to see the immediate effects of the fire and posted the shots on Flickr. The resulting photos are apocalyptic and eerie, revealing both literally and figuratively what lays below the skin of Griffith Park.

The Drkrm. Gallery will be exhibiting these photos from May 3rd to the 18th to commemorate the one year anniversary of the Griffith Park Fire, with an opening night reception on May 3rd from 7pm-10pm.

On the bright side, these brown outs always give everyone a taste of what post-earthquake life could be like. They also add to the immediate need and practicality of having a fully stocked “earthquake kit” with candles, flashlights, water, etc.

I went for a short walk, spotted this and had to grab a pic with the trusty phone cam.  The FSM as car art, he has arrived.  As a devout Pastafarian it warms my heart to know the Flying Spaghetti Monster and his noodly appendages has guided a convert to his church pasta bowl.

Ramen and pass the parm its time to rejoice.