Days before the election, Deputy Registrar John C. Haston instructs Mrs. Lucile Martin how to use one of the new lever-operated voting machines. The new devices are to be used in 14 precincts throughout Los Angeles, eliminating “hours of tedious counting for thousands of election workers.”

It was progress for democracy.

As Metro holds public meetings to discuss 13,357 different routes for a Subway to the Sea, some city officials are already trying to derail plans for a Crenshaw connection between the Purple Line, Expo Line, and the Green Line. Studies are underway for the Crenshaw-Prairie Transit Corridor, which extends approximately 10 miles from Wilshire Boulevard on the north to El Segundo Boulevard on the south.

The Larchmont Chronicle reports that the Greater Wilshire Neighborhood Council has given a “thumbs down” to a proposed underground Metro station at Crenshaw and Wilshire boulevards. They don’t want eff up any of their pretty neighborhoods with high-density development. So, they are opposed to any changes to the neighborhood protections in existing plans.
END_OF_DOCUMENT_TOKEN_TO_BE_REPLACED

That’s right kids, it’s been months, MONTHS since RideArc closed down for winter vacation, and by “closed down” I obviously mean “stopped sending out wordy e-mails filled with clever puns about riding bikes around Los Angeles.” But no fear, they are back, Fresh for 2008, you suckas! Whatever, what I’m getting at is that the first Ride Arc of the year is tonight, and it’s going to be awesome so come on out. In case the graphic above wasn’t a total give away, tonight’s ride is LA River themed, and sound like it will be extremely flat and around 20 miles. This means anyone with a bike can pull it off. Anyone who isn’t scared of the *around 40 degrees* temps that are being predicted for the evening that is. Meeting point is at 9:00PM in Chinatown (here’s a map of the location) and we ride by 9:30. See you there!

No secret that crime has been a concern of mine for a while. I spotted the most interesting two articles posted on the Crime Scene Blog HERE and HERE.  The two articles were based on a press release from the Azusa Police Department.  The Azusa PD had done some visits of the home of those currently on parole and probation.  The purpose to check on the individuals compliance  of the parole and probation terms.  They wound up getting 16 arrests for a variety of violations.

In one of the comments Lt Frank Chavez of Azusa PD signed off with his phone number. I gave him a call to find out what happened, why, the usual stuff.

I appreciated the candor.  Crime in Asuza was down 11%.  As a comparison several communities in the San Gabriel Valley had increases in crime last year.  I knew it was a loaded question when I asked “so what did you do different”.  A lot of things actually.

END_OF_DOCUMENT_TOKEN_TO_BE_REPLACED 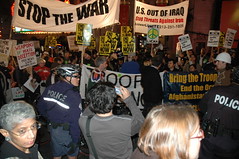 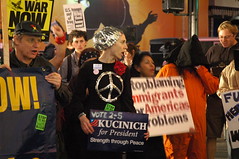 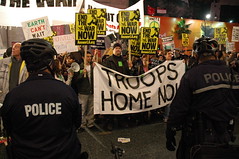 protesters organized by A.N.S.W.E.R. LA stretched down along the Hollywood Blvd. sidewalk.
END_OF_DOCUMENT_TOKEN_TO_BE_REPLACED