UPDATE: CNN has had live streaming video from inside a Los Angeles polling station throughout today. 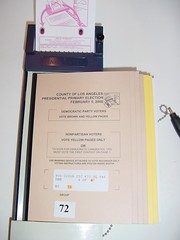 Like numerous other Los Angeles voters (including LAist’s Andy Sternberg) I was confused a little about how to vote as an independent in today’s election. To try and capture the problem, I pulled out my camera and snapped some shots of my ballot and the ink-a-dot machine at the St. Thomas Episocopal Church polling station (at Hollywood & Gardner). As I prepared to leave the voting booth, an older lady approached me and, disapprovingly, asked what I was taking photos of. I said my ballot. She said I couldn’t do that.

I should have said I was finished anyway and left it at that, but I’m pretty passionate about First Amendment rights, so I told her that she was incorrect. She called for help, and another, younger guy showed up, who told me I couldn’t take pictures. I repeated my assertion, and asked if they had any documention to support their statement. Finally, the polling center director walked over, who repeated that she was sure I couldn’t take photos. When I asked again for documentation, she said she didn’t have to show me anything and just had to listen to her. The guy told her, “maybe we should confiscate his camera.”

Both ladies expressed their confusion over why I’d ever want to take such a photo. The older lady asked why, and I responded that it was none of her business. I then asked for some clarification on how to fill out the ballot, and the director told me she couldn’t help me and walked away.

When I arrived home a few minutes later, I immediately tried finding any law that would back up their claims. I knew that any form of voter intimidation was illegal, and taking photos of other voters might fall in those boundaries, but I was taking a photo of my own ballot within the confines of my voting booth.

I also found that there was a national project underway by the New York Times encouraging voters to take photos of themselves voting, so I was pretty sure photography at the polls wasn’t a Federal Law.

I called the California “Voter Fraud Hotline”, and as far as they knew photography was legal, and so far I’ve had no luck finding an L.A. county or city law on the matter. Phone operators at a national voter hotline also couldn’t find that I’d done anything illegal, and were very concerned that a polling center director would refuse to help me with figuring out if I had voted correctly.

Everyone seems to have an opinion on this, but unless I can find language of the actual law, I’m of the belief that I did nothing wrong… besides not being sure if my vote will be counted.

Note: the part of the California Election Code that people bring up is the right to vote:

WITHOUT BEING SOLICITED, PHOTOGRAPHED, VIDEOTAPED OR OTHERWISE RECORDED, and without anyone campaigning or trying to influence your vote in any way, when you are within 100 feet of the entrance to the polling place, including while you are waiting to vote.  Cal. Elec. Code  § 18541

But this by no means you can’t take a photo in a polling center at all, let alone of your own ballot.

22 thoughts on “Is it illegal to take a photo in a polling station?”