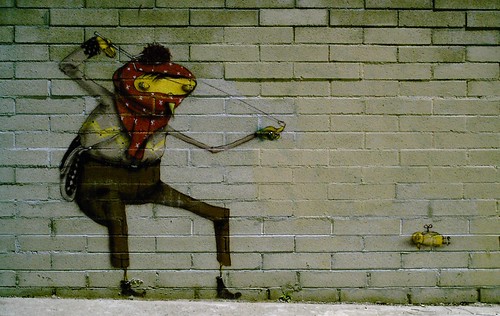 We can argue until doomsday as to whether certain kinds of guerrilla graffiti are acceptable over others. I’ve been called a hypocrite because I see a difference between the flatlined blight of tagging and the vibrantly whimsical work of artists such as Cache.

Whatever side of the debate you’re on, I’d hazard you’d agree that graffiti is by its nature impermanent and fleeting, there but for the grace of the city or the local gangbangers. Knowing this though, I was still saddened yesterday to find on Flickr a photograph showing what’s become of the curious and compelling OS Gemeos mural painted (in 2004 I think) on an alley wall just off Hoover north of Sunset Boulevard (map) that I first found and photographed last year in the relative pristine condition pictured above.

Click here to see what the wall looks like now. Sigh. This is why we can’t have nice things.

2 thoughts on “Requiem For An Os Gemeos Original”