Capping week two of the picket line, Democratic Presidential candidate John Edwards made an appearance in support of the striking WGA members in front of NBC studios this afternoon. Before his arrival the sidewalk was packed with picketers from not only the WGA, but sympathetic SAG members and television fans. Burbank police kept walking the curb to keep picketers from being bumped into traffic. Traffic, in the meantime, was a non-stop cacophony of honking at the behest of the picket line.

Edward’s initial comments were unsurprising, atypical stump speech rhetoric, but received applause nonetheless. Between the packed sidewalk and deluge of signs, few people could see him as he vocalized his support of the Guild (that he promised would continue through his Presidency) but he made up for this by then walking through the crowd, taking his time to shake hands with about anyone who was reaching out a hand. 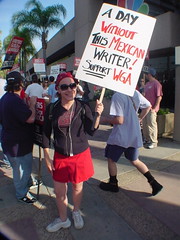 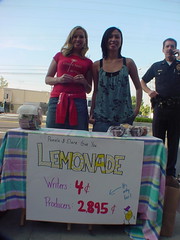 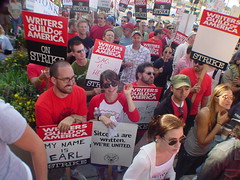 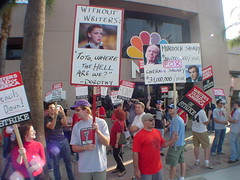