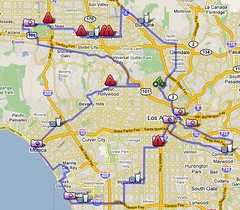 Yesterday I talked about the Wolfpack All City Century which was happening later in the evening. A 100 mile ride celebrating 1 year of weekly Wolfpack rides. I went, and it was one of my favorite rides I’ve ever been on. I was all set to write up a bit of a review of it when I looked on lafixed.com and saw this write up by a member called atavic, he says:

“Here’s the scoop from the front:
Total insanity, but insanity in a fun way. I kept thinking to myself, that if our lead group tries to keep this pace, we’ll be dying at the 80 or 90 mile mark. Let me tell you, that did not happen. Instead, our group of ten got organized and we started pace-lining to an even faster tempo. With only a couple miles to go, we came barreling through the 2nd St. tunnel like we were in a drag race.

A front group formed around Glenoaks, I think, about 20 guys, as we made our way to the Velodrome which was our first stop. Just as we were ready to leave a second group showed up, so we hung till we had a huge group to head for our second stop at Hollywood/Vine. There were a couple of attacks over the Cahuenga Pass, including one from yours truly. A big group pretty much stayed together through Hollywood, as we stopped at the 7-11 on La Brea/Sunset. From there, down the Sunset strip, the group stretched out. I got caught out chatting at the back, so I had to work my ass off to bridge to the lead riders. There were about four guys that dropped the hammer on Alpine drive, four of us fixed had to spin our asses off (again). About eight of us started tightening into a pace-line as we blew down Santa Monica/Ohio/Broadway and through blind intersections till we got to the pier where we waited for the others. From there, we cruised down to Venice and did donuts on the pier. Going through the Marina everything was pretty status quo, until we hit the bike path. There was an attack, and on the dark stretches of sand, it was hard to see the path. Once we hit Imperial Hwy, only the strongest riders caught up and from there on out, maybe around mile 60 or so, our final lead group of ten people was formed. At our stop at Manchester/Crenshaw, we waited, and waited, until we just decided to continue. From that point to the end at Tang’s, other than the one stop to pay tribute to Magic Johnson, and a replenishing in Commerce, there was only one word needed to describe the rest of the ride: FAST!”

More from me, and some pics after the jump. 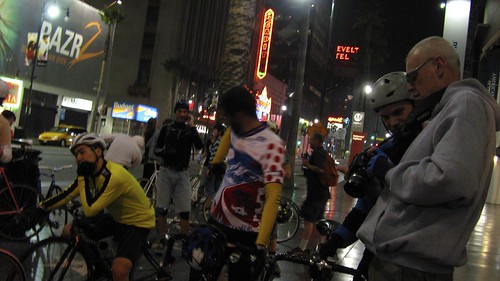 From my perspective, which was closer to the rear of the 60 or so riders who left from Tangs blasting up Hyperion to Atwater village was pretty amazing. The more big rides I do the more I feel that big hills are no problem, you just power through them. It’s the very long, very gradual climbs which just kill you. Heading from Brand up Glenoaks into Burbank is one of those climbs. The other IAAL/MAF folks and I took a little extra time at the stop to catch our breath before hitting the famous Chandler bike path. Man that thing is so cool, and useful, imagine that LA, a bike path that actually goes somewhere. Firmly in North Hollywood we decided rather than keep chasing to grab tacos and then make a shortcut to Hollywood and Highland. We got there literally about 60 seconds before the rest of the pack showed up which was an awesome thing to see. From there we hustled about 2 miles through hollywood the 7-11 near Sunset and La Brea. I myself didn’t actually make it to the end, but I did 30 miles and probably could have doubled that easily, though the next leg which would have doubled that would have put me at the furthers point from my house so I decided to call it at that. It was the perfect ride, I can only imagine the rest of it was as fun. I can’t wait until next week, and next year. 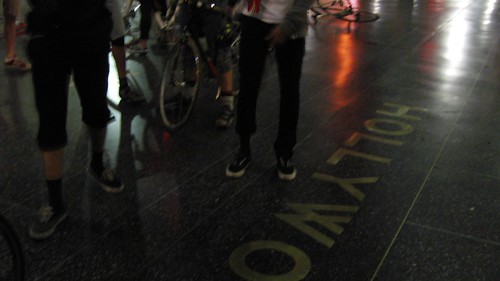 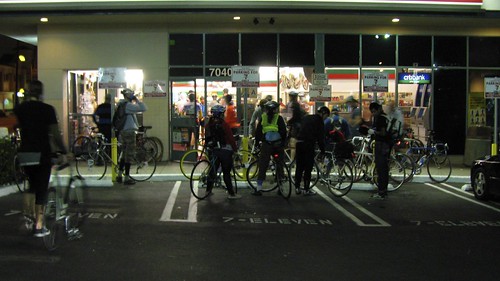