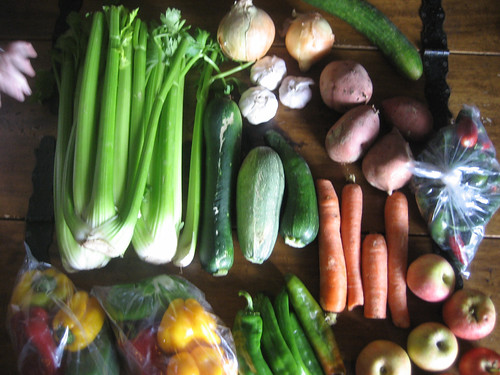 With a toddler, just one income, and no chances of becoming paid screenwriters anytime soon, we’re on a very tight food budget. Eating well on a budget can be tough, but I’m here to tell you it is more than possible.

Most Sundays we head out to the Hollywood Farmers Market on Ivar and spend whatever cash we’ve got on fresh produce. Weeks of bounty also see a visit to the bison meat lady.

This week I went with my son on my back and exactly $20 in my pocket. And the above is what I came home with. To be sure, there are many other possible outcomes. I looked at greens, fall squashes, herbs, heirloom tomatoes…

But the sale peppers were too exciting to pass up. We’ll definitely be making Chile this week. The peppers were all $1 a bag except the huge bag of jalapeños which I think was $2. (The loose Anaheims were in one of those little plastic crates, which I gave to the vendor to reuse.)

The celery was only $1 a bunch so I bought three. It’s one of my husband’s favorite snacks to bring to work. The carrots and cucumber were $2 total. The zucchinis were $1 for all three. The apples (there are six of them) were a bit under $5. I suppose they’re a bit of a splurge but they’re the best apples I’ve ever eaten. The onions and garlic came to around $2.50.

I bought the sweet potatoes last, my son twisting himself around my shoulder and reaching for them (he was on my back in an Ergo carrier). I picked those four up and handed them to the vendor, explaining that I was down to $2.30 and would take however many sweet potatoes that got me. The scale said $2.86 but he gave them all to me.

(I have no idea if my numbers add up to $20 but I assure you that if they don’t it is the fault of my memory. I did spend exactly $20 on the food pictured.)

Read more about The $20 Project here.