When I’m traveling, which I’ve been doing a lot recently, and people ask me how I like LA I always gush about how much I love it. I really do. And this surprises people usually and they ask for more which is hard to describe. I think a lot of it boils down to the reality and honesty which is LA, which is funny to say about a city with such a reputation for being fake. But we’re honest about the fakeness – We all know what is fake and we’re all OK with that – where as in other cities they don’t have any less fakeness but they try to pretend it’s real. But there’s more to it than that and I’ve never quite been able to put my finger on it exactly until I read this post on BLDG BLOG which might be the most perfect explanation of Los Angeles that I’ve ever read. Geoff starts off putting it on content by saying:

“There are three great cities in the United States: there’s Los Angeles, Chicago, and New York – in that order. I love Boston; I even love Denver; I like Miami; I think Washington DC is habitable; but Los Angeles is Los Angeles. “

Without going into individual city descriptions myself I’ll just say that since the first day I stepped foot here the fact that Los Angeles is so very Los Angeles is what sold me on it. But that’s the trivial part. This is where I knew he was really getting it:

“L.A. is the apocalypse: it’s you and a bunch of parking lots. No one’s going to save you; no one’s looking out for you. It’s the only city I know where that’s the explicit premise of living there – that’s the deal you make when you move to L.A.
The city, ironically, is emotionally authentic.
It says: no one loves you; you’re the least important person in the room; get over it.
What matters is what you do there. “

Bingo. In other cities that’s partially true as well but everyone pretends it isn’t. In LA there is no pretense about it. When I lived in Chicago there were people who expected things because of who they were and assumed they would always be in that same situation, and there were people who made it very clear that no matter what you did you could only get to a certain level of social class because of who you were. Of course that was bullshit, but in LA the people who expect stuff because of who they are are all to familiar with the fact that tomorrow that could all be gone, and the people who are nobodies today can be the most important person in town tomorrow. 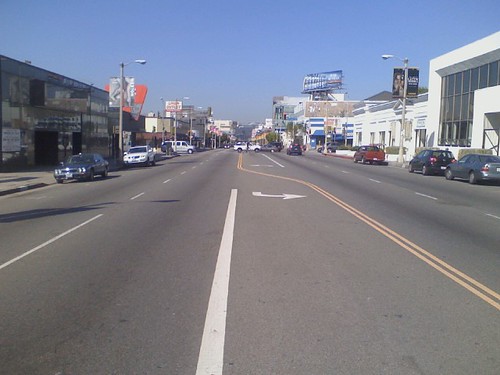 (Also, there is something amazingly comforting about all these parking lots. One of the biggest frustrations I’ve felt in other major cities – Chicago, Toronto, New York, Rome, Tokyo… everyone freaks out about parking all the time, but back to the point…)

Another Snip that totally nails it:

“Los Angeles is where you confront the objective fact that you mean nothing; the desert, the ocean, the tectonic plates, the clear skies, the sun itself, the Hollywood Walk of Fame – even the parking lots: everything there somehow precedes you, even new construction sites, and it’s bigger than you and more abstract than you and indifferent to you. You don’t matter. You’re free.

And it doesn’t need humanizing. Who cares if you can’t identify with Los Angeles? It doesn’t need to be made human. It’s better than that.”

Sure there’s a bit of Fight Club seeping through into this, but there is a reason it makes sense. You don’t mean anything until you prove otherwise. I love this post, I love this city. Almost makes me teary eyed just thinking about it. Well put Geoff, well put.

(thx for the heads up Xeni & Suzanna!)