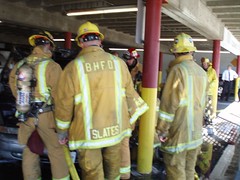 Yesterday, one of my co-workers came back to my department to tell us that there was a car fire at the Pavilions across the street. We all immediately raced over to windows facing the event. Yep, that was a car fire all right. Smoke was billowing out of the garage, and there were TWO fire engines, plus a couple police vehicles, parked outside.

I went over to investigate – and counted three policemen and six firemen on the scene. All of them were gathered around one midsize American car, a Chevy Cirrus. The car was a mess: the hood was warped and blackened, and the driver’s side window was smashed open to unlock it. [photos on flickr set] The assistant manager of the store was trying to find the car’s owner, who had left the building. She finally appeared: a small, white-haired old woman in her eighties, confused as to how this had happened. The store manager told me, as I left, that she had had the car fixed the day before, and now it had combusted. I was extremely saddened to hear that – and I left the police and Pavilions’ representatives to handle the car fire victim. Hopefully, she will be able to sue the repair shop – if they are responsible.

Anyways, the point of all this is – how many Beverly Hills firemen does it take to extinguish a small car fire? The answer is about six. Apparently, it was the most exciting thing to happen for the BHFD all year.