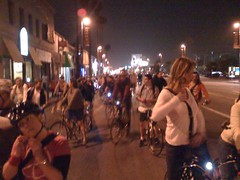 What started off as a simple discussion about a planned ride over on Midnight Ridazz has turned into a super interesting discussion about why there are so many fewer female bike riders than men in LA. There are comparisons being made to other cities like San Diego, San Francisco, Portland etc where it’s basically a 50/50 split between men and women but for some reason in LA there seem to be far fewer ladies on bikes. Why is that? The discussion, now almost 80 comments strong is packed with speculation. Suggestions include that too many people take photos of rides in LA and girls are scared of having their photos taken, that there are too many sexy sexist jokes on the rides, that biking isn’t considered “cool” in LA so girls aren’t drawn to it, or that the only time girls ride bikes is if their boyfriends talk them into it. These all sound like lame excuses to me so I’m asking here, and I only want to hear from women, why do you ride (if you do), or why don’t you ride (if you don’t). Inquiring minds want to know.

35 thoughts on “Girls on Bikes”