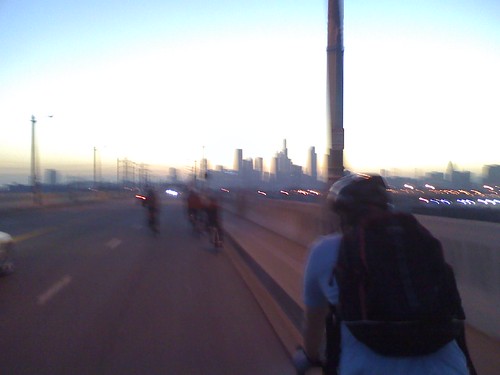 That’s a shot from tonight’s IAAL/MAF ride called “10 Bridges” because, well, we crossed all 10 bridges that span the LA River in downtown. So yes, basically we did a lot of zigzagging back and forth. The route was a little shy of 15 miles though this was also the first time I’d ridden my bike from Silver Lake to our clandestine downtown starting location and home again afterwards rather than loading a bike into a car and driving there and back so my total for the evening wad just under 30 miles. Riding bikes at night is one of my favorite things to do in the city, and you see a whole different version of LA when you are right there at street level. Some people don’t want to see that, me, I can’t get enough. I love this city, even the dirt.

Tomorrow will be much more ambitious. I’ve never been on any of the Bad Idea rides for one reason other another, but tomorrow evening they are leading a 70 Mile ride hitting doughnuts shops from El Segundo to Glendora and back to Pasadena. It’s definitely a bad idea, but I’m going to give it a shot. I’m bringing cash and a cell phone so I can call a cab and bail at any time, or maybe I’ll in a hotel somewhere along the route. I don’t know, but I’ll report back one way or the other. It’s starting at 10PM near LAX if you want to join us.