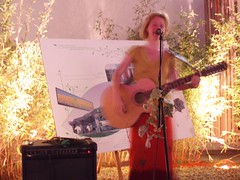 You all know that strange looking green gas station on Olympic and Robertson, right? It’s called “Helios House”, and it’s BP’s attempt to build a better, greener station. They say it is a “a kind of a conversation between BP and people who come into the station.” To which, the public has responded, it still sells gas! Not alternatives to petroleum, not ethanol, not hydrogen refills or electric car recharging or biofuel or anything – just gas. Calling your grades “good, better and best” instead of by octane count still isn’t going to make me forget you’re selling gasoline, folks.

Anyways, I stopped there last night around 9pm, on the way home from work. I chose that station mostly out of curiosity (and because I needed gas) and found a live concert going on. A female singer with a strong, deep voice was singing Johnny Cash songs and playing an acoustic guitar. A half dozen chairs were set up around her, and the station workers and a couple of Prius drivers were assembled to listen. I asked what was happening, and was told that they rotate musicians through for weekly concerts. So if you’re looking for gas on a Tuesday between 8 and 10pm, and you’re in the Olympic/Robertson range, you can stop by, fill up, and listen to an acoustic performance.

(Photo above goes to the very small set on Flickr. Note the self-promoting presentation for the station behind the singer)